This is the recipe set for the first half of October on our facebook group working our way through Jane Mason's Perfecting Sourdough.  The usual recommendation is to read and reread the recipe.  I noted that Bagels are made with a very stiff dough...so except for all the other ingredients I held back some of the water and added sufficient to get the stiff dough...not too stiff, but not slack.

I activated the sourdough overnight, and it has taken most of today, with the buns coming out of the oven just after six...it was the dough doing its thing...in the meantime I cleaned the brass and silver, and attended to other urgent matters.  I had a lovely call from my friend Penny this afternoon.  We chatted about the time she spent in the US which is when she tasted the real thing! 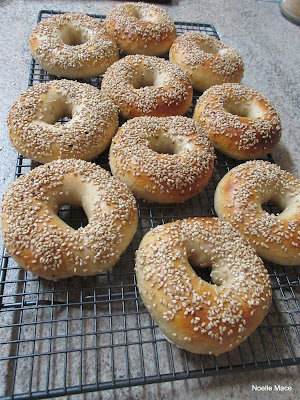 We have never really been 'bagel' people...I think I once had a little chew on a piece and did not think it was worthwhile finishing the bun!  We'll see what these are like tomorrow.  I had intended baking the sweeter version: Montreal Bagel from the Book of Buns, which coincidentally is being baked on the 'sister' group!  However I had no malt syrup...and our local honey is also coming to an end.  Maybe next week!
Posted by Stasher at 18:52