Fougasse from Paul Hollywood's How to Bake

More and more, we are recording TV programmes, then watching them when it suits us.I had heard from friends that a couple of weeks ago, Fougasse had been Paul's choice on the Great British Bake Off.  Like a worm, this became buried in my mind, and then on Saturday to go with soup for lunch, I rustled up some Fougasse.  Whilst we went for our half an hour power walk, they were proving nicely under their cover.  From the recipe based on 250g flour, which the recipe says makes one, I made two: a nice sized fougasse for two people to share.  His book gives only two slashes, whereas on the show they were making six slashes each side.  The ones I made reminded me of the leaves from the Monstera House plant, but in them, the slashes go to the edge...As it is also known as the Swiss Cheese Plant, how about a cheesy version......I'll try that next time, maybe a great idea for our Gardening Club parties! 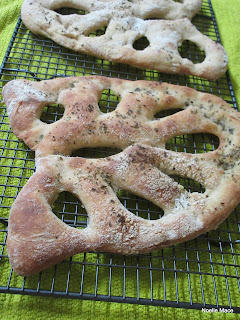 That evening we watched the episode, where for the Botanical Week, Paul asked for a herb fougasse.  Wish I had put fresh herbs in mine, as well as scatter them on the top.  I can't remember exactly what Paul said a Fougasse should be like...but Mr S said that is exactly what yours was like!

I've made Paul's bacon and onion fougasse in the past, and that too was delicious, but that has several stages and is more time consuming, whereas this Fougasse on page 70 of the book, can easily be made in a couple of hours.