In a Vase on Monday - Birthday Posy

With the few remaining flowers in the garden, I managed to make up this small arrangement.  It is dedicated to my sister, whose birthday it is today.  Just three types of material...three sisters, arranged in my mother's favourite little vase brought back from Japan by my father.  The darker bronze foliage tipped by small white flowers is the Persicaria Red Dragon, a present from Cathy, the little roses are Ghislaine de Feligonde, and white Michaelmas Daisy.

The Persicaria has now yielded at least five new plants, and all going to members of my gardening club, to raise funds for getting some great speakers for the new year!

The Michaelmas Daisy is magnificent.  I bought it as a small flowering plant, in a pot, the sort you get at the greengrocers for about £1, but it must have been sprayed with dwarfing compound as it was flowering then at about 20cm high.  This year still at the front of the border where I thought it belonged, it has grown to about a meter and is covered with lovely blooms, must appreciated by the bees and other flying insects at this late time of the year.  The stems are strong and there is no sign of flop at all, most probably the best white daisy I have seen!  It very nearly got grazed completely to the ground by the hoards of slugs and snails we had earlier in the year.

The little dish I bought at the airport in Spain returning from my visit to the birthday girl many years ago. 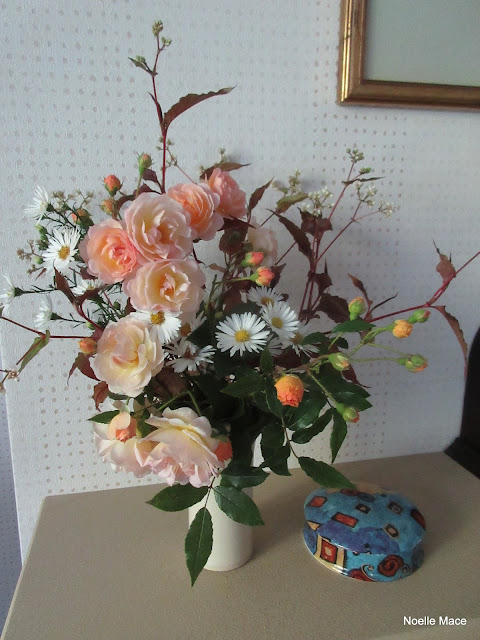 This afternoon we had a walk to the birthday girl's favourite woods, which earlier in the year are bathed with dapple light and bluebells.  Now there is the the 'straw' from the leaves and stems, but on a long fallen silver birch tree were were beautiful fungi...as since this is one of the reasons we walked out there, to see if there were any fungi..I was pleased to see this one. 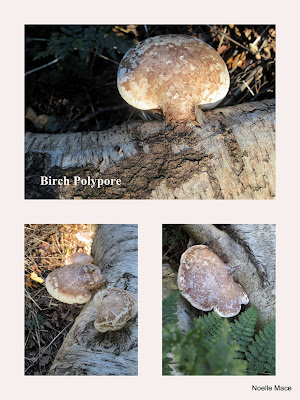 Cathy is also thinking of Autumn, but her arrangement full of colour is an echo is the glorious weather we are having at the moment.  Do go and and have a peep!
Posted by Stasher at 19:01

Labels: Family, Fungi, In a Vase on Monday