This is the second try at the Saffron Buns from The Book of Buns.  This recipe is on our baking challenge for the second half of September 2016....and my friend was arriving on Saturday, so what could be nicer that having saffron buns, clotted cream, and preserves after our walk around Kenilworth Castle.  I had the apricot and pistachio, and Jayne, having tasted the blackcurrant jam...even had a new jar to take home with her, together with a helping of cream and buns to share with G on Sunday. 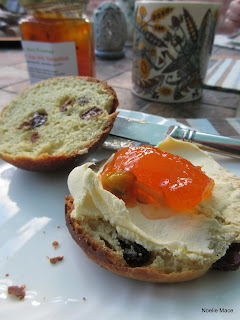 I was going to bake these on Friday evening...but felt they were just not rising in line with my experience with other buns...I even left them overnight for a slow rise in the conservatory, and even in the morning, they did not seem to have risen significantly.  They went in the oven...and they were reasonably light, but not as fluffy as I would have expected.  For 300g flour, there is 90g sugar, and I wonder whether the high level of sugar retards the yeast growth, which also has 60g of mixed lard and butter to struggle against!  I also wonder whether the saffron also affects the yeast.  Next time I would reduce the amount of sugar, activate the yeast in a little of the milk and sugar, then add the rest of the milk in which the saffron has been infused etc.  For more details here is the link to my previous attempt.

Labels: Lessons Learnt, The book of buns by Jane Mason