This is the bake for the start of September 2016.  For just the two of us, I decided to make four smaller loaves rather that the one loaf from 580g flour, as per the recipe.  By allowing the dough to rise in a large oblong covered plastic tub, when it was popped out on the work surface, it was already the right shape to stretch out and then lay on the prepared onions and olives, and shape.

I wanted fairly rounded loaves, so used some oven cloths rolled up to help prop up the loaves during their final rise.  I used baking parchment, and when they were risen simply slid the loaves to separate them on the trays. 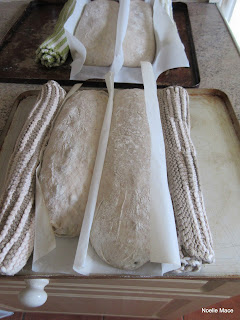 After rising within a large inflated plastic bag, they were quickly brushed with olive oil, but I forgot to slash them...and after baking, were left to cool. 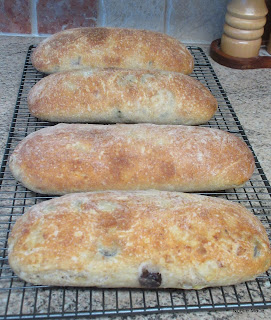 The recipe is on page 110 of Jane Mason's Perfecting Sourdough.  I very much liked the dough on this one, and will use this mixture of wholewheat and white wheat flour for other bakes....

Most weeks I love to visit and chat with Jaye who runs a stall at Kenilworth Market carrying olives, antipasti and oils from mainly Sicily.  We sometimes see each other at other markets close by.  I used to buy a mixed tub of olives about once a month, but now that Mr S is enjoying olives, and I am cooking far more often with them, it is nearly every week!  After these loaves, I'll have to restock next week.  Jaye marinates the olives in herbs and they are the very  best.  What I love is that you can choose a few from each of her bowls, to make up a nice variety.

For Saturday lunch, with our varied salady lunch: roasted pepper, walnuts, beetroot, houmous, tuna, artichokes,  we enjoyed the remainder of the loaf...Mr S had a couple of slices with cheese for his supper last night.  The remaining three are in the freezer! 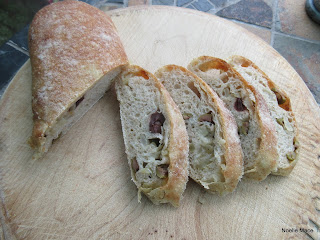