Mondays seem to fly by and its not until later in the week, that I feel able to go into the garden and be inspired to cut some flowers.  Maybe it is because it is late in the flower cutting season, and this year I have not planted autumn flowering plants.  Tucked in a corner amongst my potted ferns, is a graceful grass: Hakonechloa Macra albostriata, growing in a blue ceramic pot.  We had seen this grass planted to great effect in the Birmingham Botanical Gardens last week.  I had first been introduced to this plant by a member of our gardening club.

After wheeling my bicycle back to the shed, I spotted some lovely berries on a self seeded Hypericum.  I had one in a pot several years ago, got rid of it, regretted that, and then several sprouted around the garden...That plant has rather insignificant flowers, but lovely berries, which start green, then get a red tinge, and finally turn a glossy black. 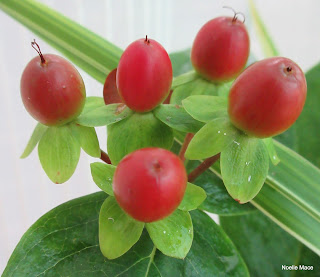 I've been sorting through my vases, and came across this soap stone vase given to me by my mother many years ago, but sadly it started leaking and I realised that the two elements were stuck together and not water tight. 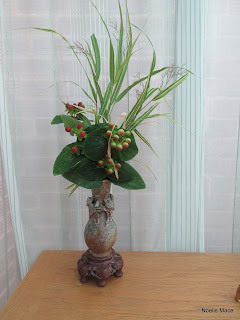 I had tied the material with some raffia, and decided that the ends were worth bringing up and having a little peep...but now a different vase was required.  I had cut some other material, but felt that the arrangement was just ending up like one of those pots of stew, where you have thrown everything in where there is no distinct flavour! 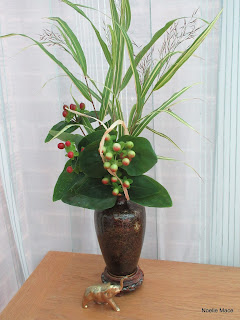 The little elephant is a reminder that this weekend my dear friend Jayne and I spent a wonderful day together.  Jayne loves elephants.....
Posted by Stasher at 11:59

Labels: In a Vase on Monday, Plants, posies