This is one of the bakes for June set for the facebook group baking through Jane Mason's Perfecting Sourdough: page97.  Its my first time baking this recipe, but since we were expecting a friend to stay, one loaf would not have been sufficient, so the recipe got scaled up for three loaves.  I was going to make two 500g loaf tins and a banneton, but then I decided instead to use part of the dough to make up some breakfast buns. 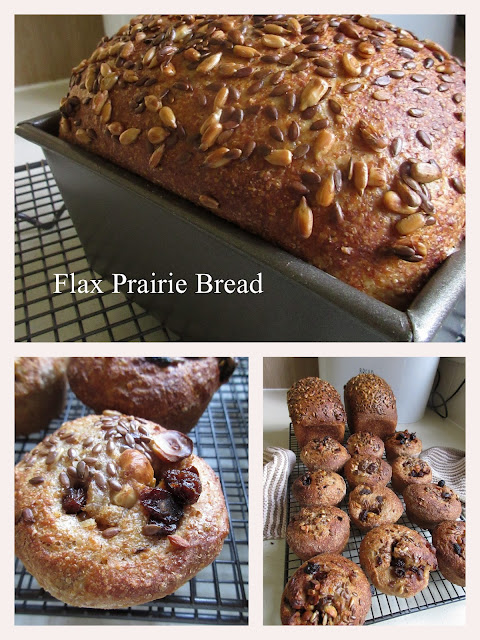 When I went out to buy the flax I was a little daunted: golden linseed or flax seed?  They looked quite different.  There was ground flax seed that was need for the dough and dark linseed shown on the loaf.  I have read that they are really equivalent...and now have a stock of seed: golden and dark and Prewett's ground seed.  Having been through the search I will settle on the dark seed from my local wholefood shop: The Good Earth, and when I need ground flax or linseed, get out my little grinder.  The dark seed was grown in the UK and organic, the golden sort imported from a long way!

Having baked nearly every recipe in Jane's other book:  The Book of Buns...I have lots of flavours and techniques under my sleeve.  For the buns having flatten the dough out to a large oblong, some plumped up raisins and chopped hazelnuts were sprinkled on and a sprinkling of cinnamon, but no added sugar or butter, before it it rolled up, chopped into 12, and left to rise in some muffin tins.

Some time ago, I think it was on one of her comments on the Book of Buns Facebook group, we were reminded to soak nuts and seeds.  This helps them not to burn too...to get the seeds to stick I used Clive Mellum's Skilly Wash which worked a treat and gave a great sheen to the loaves and buns without the need of a beaten egg.

We had a lovely brunch this morning...sliced toasted Flax Prairie Bread topped with smoked salmon and scrambled eggs with a large spring of basil on the top, followed by a bun, with preserves, and juice, tea, and coffee and conversation and laughs!
Posted by Stasher at 14:05