Starting on the Garden

I still have that sinking feeling regarding our new garden that I experienced when we first arrived.  I didn't take pictures of it when we first arrived...there were big patches of rampant periwinkle, and wild onion that had been allowed to self seed all over the place for several years, a large old buddleia bush which was the centre of pile of garden rubbish, a lot of bindweed, and large patches of mint around the edge etc etc.  The lawn is a weed patch which was further damaged through the various building works mainly the conservatory.  I'm not worried about that in the long term as I expect to get rid of the lawn by and by.  In the meantime I hope to repair the worst patches just to have a reasonable surface to look at, and avoid the sticky clayey surface when it has rained. 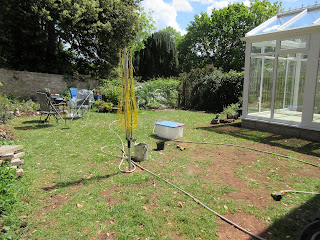 Beyond the  stone wall is a large evergreen Holm Oak which was starting to shed its leaves during the very dry weeks we had in late spring.  The garden shed base will be the next to go in not far from the house, and the washing line will be moved too.  Next I am waiting for some new fence posts to go in, and then I can make a start on setting out the back garden. 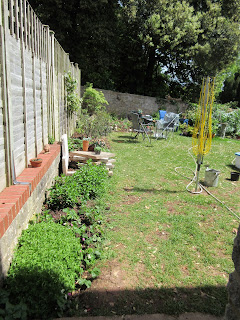 This is looking toward the corner where we dug out several years of compost.  It has already been spread around to help break up the heavy clay around the garden.  For now I have dug over the area and am using it as nursery bed, and planted out the acer tree I had growing in a large pot and many of the potted cutting and divisions.  The blue bench is placed to take advantage of the view. 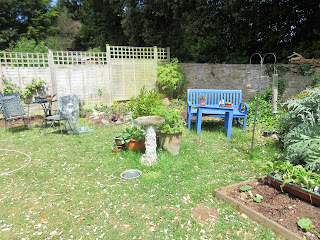 The artichokes which I quite liked before they pushed out their flowering spikes will be going shortly. The really do attract many black flies and take up too much ground space.  I think they are quite old plants of an uncertain variety, some are so spiky, and may end up in a flower arrangement.  I do like the look of those bold steely leaves and maybe one would be nice so I may use one of the compact purple varieties.

I've started many gardens and in the end they were rather nice, so I need to remember that, rather than dwell on the present state of affairs.  Next week The English Garden Festival, just a walk away, hopefully will give me inspiration.  My membership of the Bishop's Garden gives me admission to this, and I have already invited a couple of my gardening neighbours to visit it with me, so I shall be there on at least two of the three days...hopefully when I get back my hero will have got some of the indoor DIY jobs done!
Posted by Stasher at 16:23