I knew the weather was going to be soggy today, which is why I have put off meeting with a friend to do a tour of the Christmas Fair at Well's Bishops Palace until tomorrow.  One of the best things I can think of in the way of 'distractions' on a bad weather day is a spot of baking, and since sourdough can take most of the day...its the night before that one has to prepare by reinvigorating the sourdough starter.

This morning my big bowl of sourdough was frothing away, ready to be used.   Following the recipe in 'Perfecting Sourdough' by Jane Mason, for Beijong Sesame Buns, set as one of this month's baking challenges, I substituted peanut butter for the roasted sesame paste.  In no way do I imagine that these would pass the test by a Beijing Sesame bun connoisseur!  For one I used a little walnut oil instead of sesame oil to lubricate the laying of the peanut butter, and I substituted the pinch of salt on the layer of peanut butter for a little sugar.

They were a bit tricky to shape, but I was not in a hurry, and got there in the end.  They came out as it said in the recipe: crisp on the outside and tender on the inside. 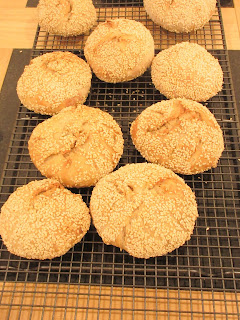 There are layers within the bun, and quite nice with our afternoon cup of tea.  Sometimes when having a completely new tasting bun with a different texture I am not always bowled over. 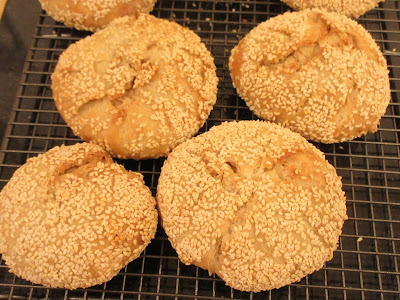 I may feel differently when having my second or third bun!  But for now, they will be going into the freezer and taken out to have occasionally over the next couple of weeks.

We needed some bread so I experimented with some white flour to which I added some maize polenta...to be cut at breakfast time tomorrow. Two 500g loaves the sourdough way of course! 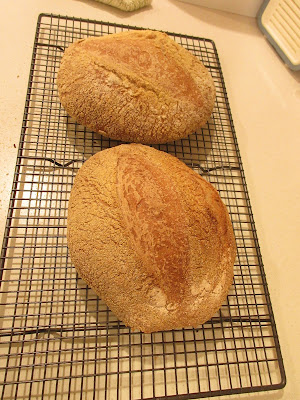