A few weeks back I made a cake, I remember that it was delicious, and also that I had used spelt and not the flour suggested in the recipe, almonds, apples, and had added to the recipe a handful of raisins.  I had not written my changes in my book, but I did remember which book I had been reading at the time: Short and Sweet by Dan Lepard.  The flavour of the cake changed over the days, maturing...it was very good on day one, and still very good on day 4!

Mr S is off to do a session of archery with his new pals this morning , and I thought to send him off with a cake to share at coffee time.  Since his host had very generously supplied us with some apples from his orchard, this cake would just meet the bill.

As a whole I much prefer cakes without butter cream or icing, and when I was looking for an apple cake this recipe of Dan Lepard's had a different and very easy technique.  Next cake bake I shall try the recipe exactly with the Rye Flour.  Again another question and the possibility for two variations: white rye flour or wholemeal rye flour?  If I have not picked up any rye flour, I shall probably use sifted wholemeal rye which I always have in store for the sourdough base.

Here is my variation, but to read the technique see the link to Dan Lepard's  recipe for Rye and Apple Cake published in the Guardian.

I slightly upped the above for instance 175g spelt 85g butter, 120g sugar etc as I wanted to have two 500g tin cakes.  After all, I wanted a cake to have at home! 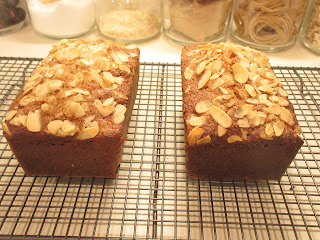