For this loaf, I used regular wholemeal rye flour as an alternative to the coarsely ground specialist rye pumpernickel flour.  As Mr S has definitely said that he did not want any more caraway seed, I substituted this for fennel seeds.  I followed Jane Mason's recipe from #Perfecting Sourdough where she recommends soaking the seeds overnight in some water.  To give this loaf a little texture, in the soaking water I added some rye berry flakes and a handful of pumpkin seeds.

The dough was rather sticky so kneaded it in the mixing bowl, which worked rather well.  This is probably the sort of dough which, had I had a table top mixer, would have preferred to mix this in a machine.

Looking at the size of the dough, I felt that my standard 500g loaf tins would have been a little small, so opted to use the Silverwood tin, which in my opinion needs about 750g to 800g dough.  As I have been finding turning out long proving baked sourdoughs from steel tins a little tricky recently, I also lined the tin with some baking parchment, as well as buttering it.  This worked rather well. 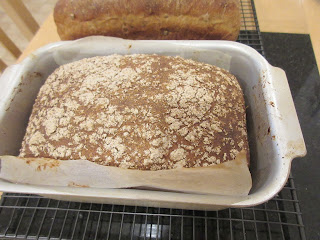 With molasses in the dough, it is obvious that the finished loaf would be on the dark side, but I think this time the loaf was a little overbaked.  I should have noted this as the loaf was well shrunk from the sides by the end of the baking time. Not to worry, it is getting softer since it has cooled, and given that sourdough bread is probably best kept for a day or two before cutting, there will be a good flavour. 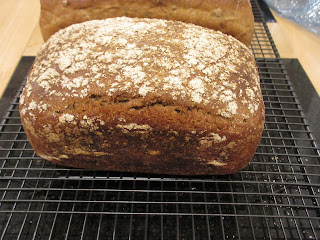 I think the Silverwood tins transfer the heat very efficiently compared to my black heavy non stick tins, and next time will omit placing then on a preheated baking tray.  I usually bake tins on on preheated baking tray which helps the bottom of the loaves bake well.
Posted by Stasher at 18:18