This is one the December 2017 baking challenges from Jane Mason's Book: Perfecting Sourdough.

I doubled up on the bulk fermentation ingredients, then make half with dried cranberries and pecan nuts, and the second one with hazelnuts and raisins.  For the flours I used a mix of half and half white strong wheat, and creamy spelt.

As always the nuts were first baked a little in the oven till smelling and light golden, then with the fruit they were soaked in some of the liquid overnight, whilst the sourdough from the fridge had its overnight refresh.

These loaves took a very long time to rise, most probably because it was so cool.  They are meant to rise in proving baskets, but I felt more confident using tins for this dough.

They were shaped up and put into tins around 15:30 on Saturday, and by 18:00 still were not ready, so they went into the very cool conservatory for an overnight 'refrigerated' rise...but at 6:00 am they still were not high enough in the tin.  Having been brought them back into the kitchen then, and having been given a boost by sitting on top of the cooling toaster from breakfast, they finally went into the oven at about 11:00 am. 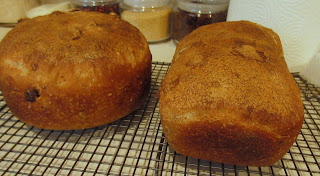 The Cranberry and Pecan Nut loaf is now in the freezer, and will come out for Christmas morning breakfast...but I could not resist cutting into the hazelnut and raisin loaf: 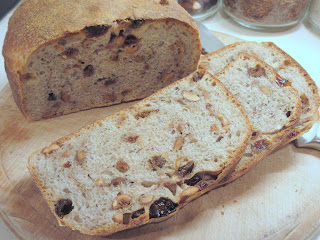 The flavour is topnotch, with hazelnuts warm and mellow, and the raisins soft and tangy in contrast..spread with a little butter and thick honey, then have made a tasty snack with Sunday afternoon tea.
Posted by Stasher at 19:08