In a Vase on Monday - Codswallop

I can just hear my mother say: that's a load of codswallop.  I would laugh and say well it is in a Coddswallop bottle.  Cathy who hosts IAVOM, by complete coincidence as staged her offering this week in an old bottle, and she has had snow, and snowdrops, so do go there and see she and other contributers have come up with. 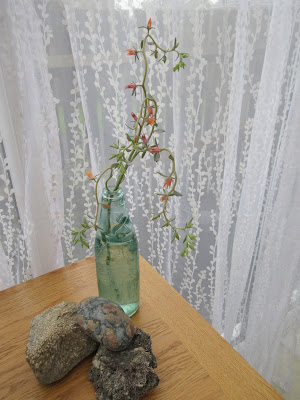 The colour of the stem is almost the same as the acqua blue of this vintage bottle which still has its marble.  I love old bottles and recently on our visit to Bath, spent the best part of the day at The Museum of Bath at Work, where they have a complete bottling plant, with all the old bottles.  This is one of my top five museums.

A couple of my other vintage bottles are standing in with Festive bits and pieces... 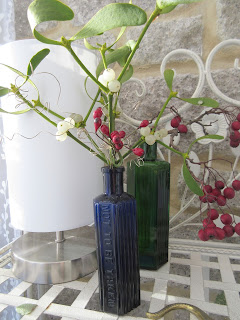 My mother's idea of in a Vase on Monday would be brimming with flowers, but at present most have been beaten down by the heavy rain.  Unlike friends in the Midlands, we have had no snow settle, only a few flurries of sleet to cool the ambient temperature in the conservatory to the very low 5 to 10 C. 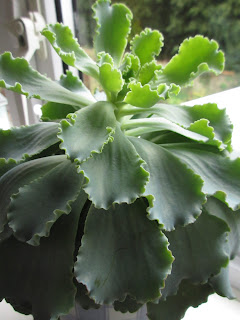 My echeveria 'Curly Locks' which was bought at the Wells Plants festival earlier this year, decided to throw up a flower spike.  It grew rather tall, most probably because of the poor light levels.  Since the plant had to be brought inside, and the flower size was starting to be rather top heavy, it made the ideal material for this weeks In a Vase on Monday. 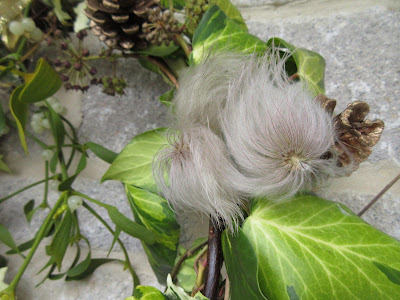 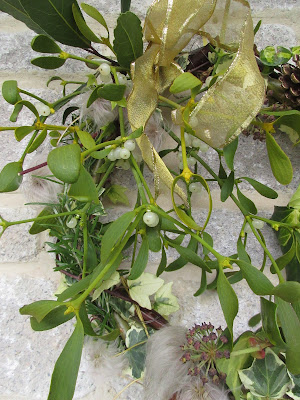 Mistletoe grows in abundance in the area around Glastonbury, and at the great wreath making shindig at Wells WI last week, someone had brought in some vast bunches.


Together with some variegated ivy, aka: love stones, some Rosemary for remembrance, some bay, from the garden and old man's beard which another member had brought , I give you my loose Christmas Wreath, hung against the stone wall by the front door. 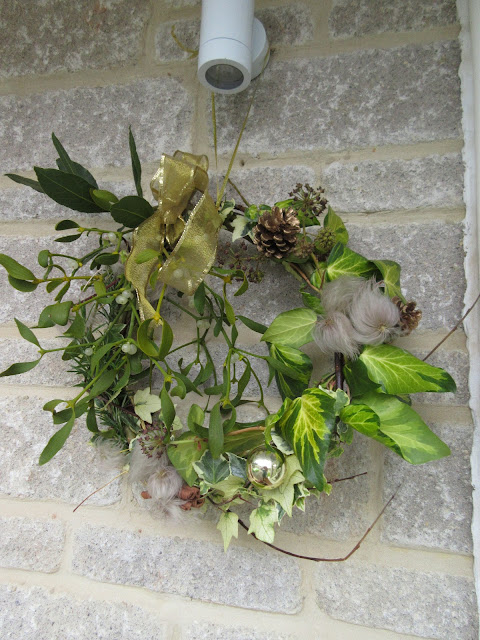 All the wreath bases had been made up by a Member's husband from willow and other shrubs from their garden...I can just imagine there was a great pruning spree as there were about 70 wreaths.  I think they have a 'willow' orchard....well we are very close to the Somerset Levels which are renowned for their Willow products.

Labels: In a Vase on Monday, succulents, Wells WI