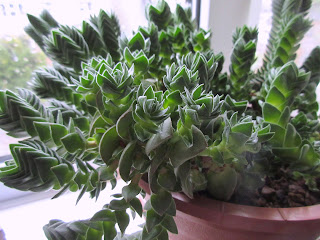 This is the slightly etiolated Crassula Buddha's Temple...with half over spilling its container.  I can just get half in the picture.  This is one of my favourite succulents, and I have written about it several times: earlier this year, when it was in flower back in May 2014, and when I had had it for about three years in February 2014.

In Wells Market from time to time, and for several days this week, at the Christmas Market, there is a stall selling rather tasteful containers of succulents.  I often stop for a chat if there are not buyers which of course should have priority, and had mentioned this plant to him.  Today I took three offsets, one of which had already started to grow tiny roots into the grit, to give to this fellow succulent enthusiast.  He had not heard or even seen this form.  With so many possibilities for cuttings it is a pleasure to share this rather rare form around.  Once Christmas is over, I think I shall start some in pots in a well draining gritty compound.