1. With the bright days and cool frosty nights of the last few days, the ground is beginning to dry out a little, so I have been spreading mulches around the garden.  Sheltering against the ivy clad fence, Hedgehog 2 was disturbed but soon settled down under its duvet of leaves with large bag of compost returned as its thick waterproof roof.  For a small garden I was surprised and went to check whether it was just a 'second home'.  I can confirm we have two hedgehogs within 10 meters of each other.  The pheasant is in fine form calling frequently during the day, and we are on the edge of a territory for two pairs of robins, who are are in the garden together.   The bird song has been a real delight and I  to have spent more time just 'being' outside.

Now for the party planty things: little morsels prepared for the rendezvous chez Jon who as host has a great buffet full of gardener's delights. Of course, as with any get together, some may be sad stories requiring commiserations, and occasional health issues are discussed, as well as other matters such as the wildlife of which a few was on my dish no 1.  You may join the party either by bringing  your own six little morsels, and of course we all tell our friends on our own blog about the weekly party that is 'Six on Saturday' .  We have a few guidelines which are posted on Jon the Propagator: The Host's  page. Do join in by bringing your own six, but as there are many dishes to savour, and with no depletion, everyone is welcome to visit, with or without your SOSs  You can't believe how a few appreciative comments, or even suggestions, advice or recommendations can mark visitors out as welcome party goers, so go on, leave some here and against other sites at this party. The party venue this week is here so do join in.

2. Corydalis malkensis is doing nicely in its new spot, and performing as well as the existing two further back in the bed. I just love these little spring beauties, they come up quickly, flower and then later when the other herbaceous start to do their thing, gently melt back to their tubers. 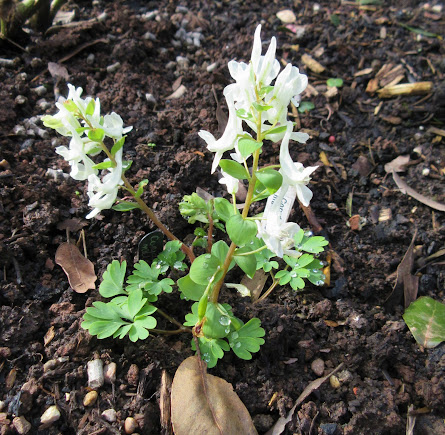 2. Corydalis Beth Evans is doing particularly well. I first acquired a plant in 2018.  It has been divided a couple of times, when I say divided, I mean I seperate out the multiplying tubers and get them to circulate around the garden. of course with a name label, as I have so many little seasonal plants that are up and down according to their habit, in the conservatory bed. I have three such groups and now in their second year in this position, I am pleased to report that they have come through all the ice, wet and dry since last year.. 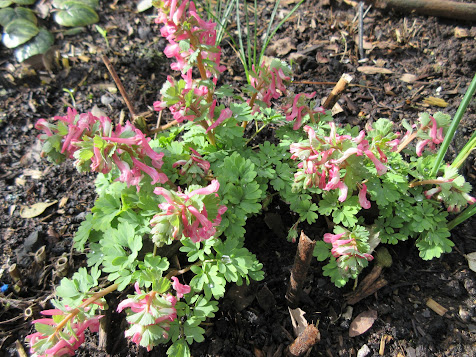 Comparing very favourably and I would say that I actually prefer the new 'accidental cross' ? from Andrew which is a very similar but more uniform colour and fewer green leaves on the longer flowering stem. She has a little more 'hauteur' and she stands up a little more elegantly drawing admiring looks. 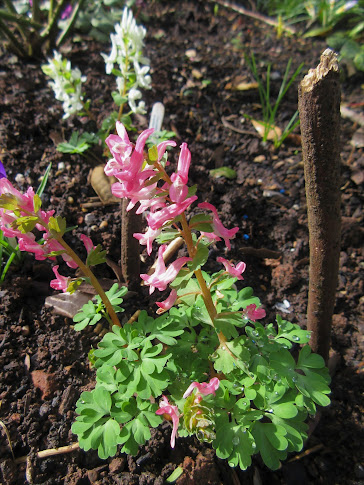 No wallflowers here, and if you wish to join in with the short fleeting spectacular dances of early early spring Corydalis, you could cross over to fellow SOS blogger Andrrew who has a serious handle on these and from whom from time to time, you could, for a reasonable fee, attract some beauties to your very own garden. I have high hopes that in due time, he will write a book about these.
3. In the sunshine, the sound of bees buzzing is a sure sign that temperatures are warming up. The latest Crocus to flower is Crocus vernus Pickwick.  It came to this garden as a few crumbs bulbs lurking around some other plant I brought on the removals van. Since then,  by moving one or two to different areas each year, several small groups are forming very nicely.  Bees and other insects have been feasting this week, having enjoyed other crocus over the last weeks, as and when temperatures allowed. 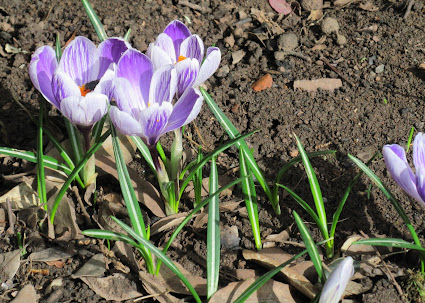 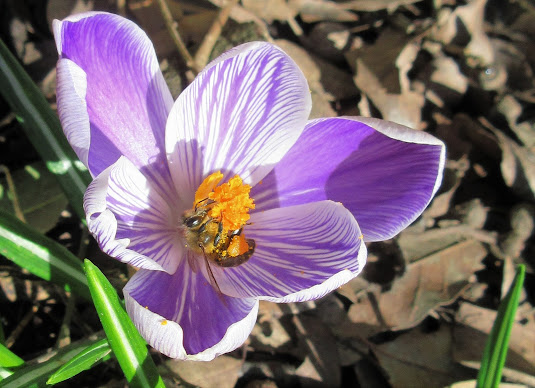 Here flowering very nicely this week is Crocus tommasianus Ruby Giant, which is neither ruby nor a giant is just a week later than the paler 'Barr's Purple'. I can't seem to get the colour right though. It must be the lighting or the camera, but as with any party seeing with your own eyes is the best! 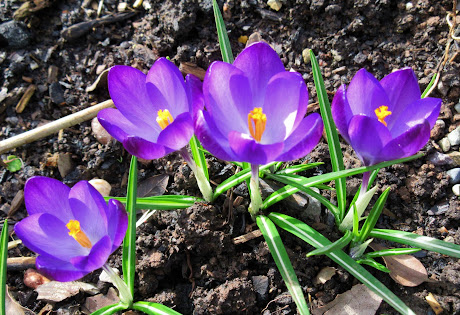 The clumps of Barr's Purple are more than ready to split, and I have already earmarked where they are going. 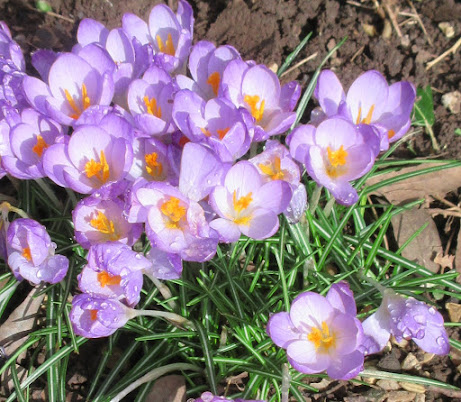 4. This week the very small but exquisitely patterned Crocus minimus Spring beauty is my top favourite.  The initial few bulbs were bought at the Bishop's Palace Rare Plant fair in 2018, and again these have multiplied very nicely in the garden. 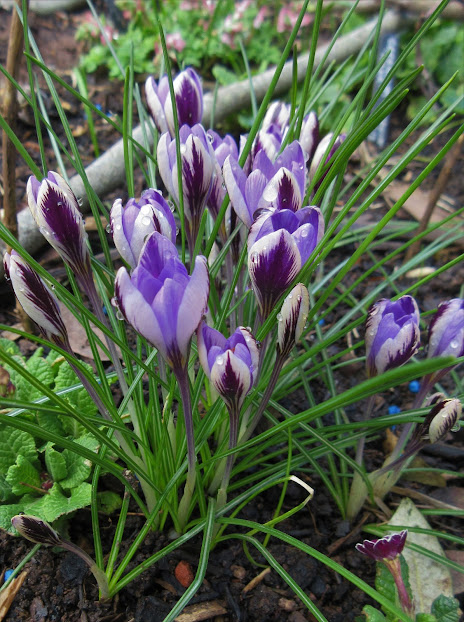 For the next season I shall pot a few of these bulbs into a pot so that I can display them on a shelf. I already have a few new crocus earmarked for buying for next season: I may even put in my order early at Pottertons ready for delivery in the Autumn.

5. I meant to divide up the clump of miniature Daffodil Rip Van Winkle, so must really do it. I think this year I shall do this as soon as the leaves start to turn brown, and not when I can no longer locate the clump or know where any of the other spring beauties are growing. What I shall do as I mulch etc., is prepare the place they are to go and mark this well.  I am having to resort to drawing maps with grids of where I plant bulbs...the things we have time to do these days!!!! 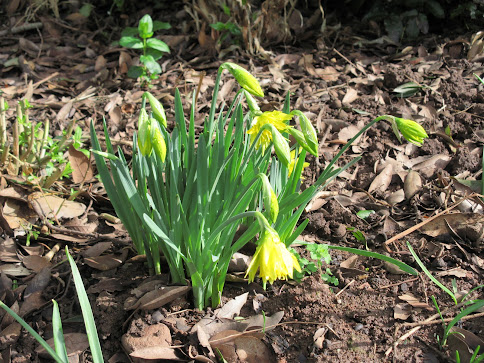 6. Last year I received a little packet of Viola Tricolor  from Jim in November: the seed got sown straight away.  I'm in the middle of pricking out the little seedlings..... 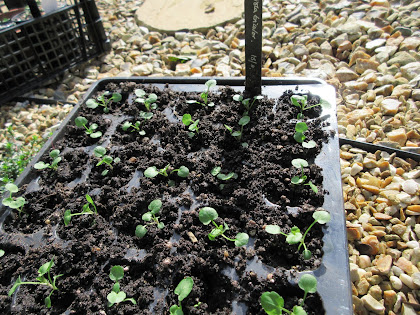 If your return to this party in a few weeks time these will be out in the garden. Hope you enjoy your own garden party, and this one, and the many that will be going on around the country.