Why the lavender wand? Its just that I named myself the Sugar Plum Fairy when I emailed Diane a week or so ago to thank her for the lovely gift she gave me: a beautifully hand tied bunch of lavender heads from her garden . Also, I am in Sugar Plum Fairy mode having made a batch of wild plum jam yesterday. 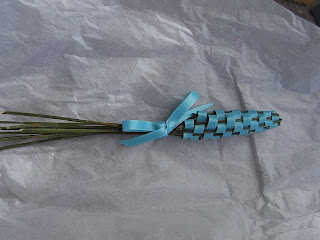 I was all set for cycling out and foraging yesterday, when I had a call from Penny...'Would I like some wild plums she had picked from the hedge of a friend's garden?' With all sorts of apologies about how tart they were, and perhaps one needed to skin them, I assured Penny that the jam would be delicious. I cycled to Waitrose to pick up my favourite T & L sugar, and by the time Mr S was home, the jam was ready to bottle. Strange saying this, should we say 'jar'? This morning at breakfast Mr S declared the jam to be delicious. There were sufficient yellow plums to make just one jar, and the rest was red. 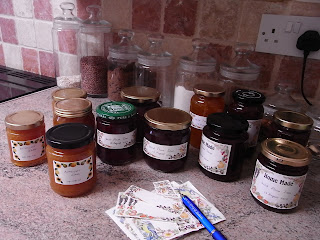 I have a little assortment of labels, and am using a pretty hedgerow pattern. These were passed on to me via a friend, from an old lady who no longer makes jam, so from this batch, there will be three jars given away: one each for Penny and her friend, and one for the donor of the labels.

On Monday as well as the apricot jam in the photo with the plum jam, I made some runner bean chutney. I managed to collect 800g of runner beans from the garden, and was really pleased with the recipe which I had devised last year. 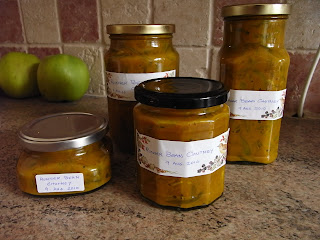