At the WI craft group, our Autumn project was a quilted panel. We were inspired by the quilts brought by a speaker earlier in the year. When we started the project, I had no idea what I would make with it.


On a visit to the Wastells, I realised that there was a rocking chair which needed a cushion, and had a crafty measure. As the original quilted square was not quite big enough, I added a darker border which I also used for the back. I had already quilted the central panel and luckily the backing and wadding was much larger, and I was able to increase the size of the panel.The fabric for the central motif was from my stash. 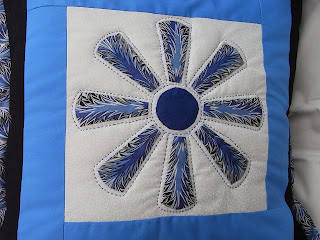 I love patterns made on paper from inks floated on water. There are shops in Italy which sell this paper for book binding, and when I saw it printed on fabric, I was immediately drawn to it. That's another craft which I would like to have a go at!

Last week I went to a local shop and got the cushion, so on Saturday, I set to after lunch. Unlike knitting when one can unravel and reknit, once fabric is cut that is that, and also 'unsewing' and trying to get things square is hard for me....but I am getting better at it! It really did take me about four hours to do the cutting and machining, and several more to add the patterned binding.....I was so engrossed in the project, that when I got round to getting us some super, I realised that we had forgotten about the concert we should have gone to! Too late though to go, and nothing much on the tele, so I stitched at the binding till my eyes were completely shot, but I managed to finish it off on Sunday in the bright light of the conservatory. 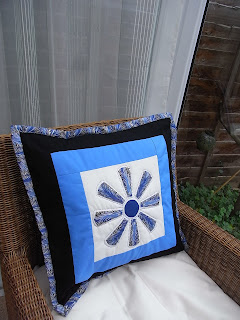 This is a really small project on the scale of things, and what I have learnt is how really skilled some of my friends are, several of whom have already completed magnificent bed sized quilts!
Posted by Stasher at 13:22