Late Autumn, early winter, before the rush to decide what to make for Christmas, there is time to play around in the kitchen. With gifts of surplus produce I get out books, thumb through, then try to remember what I would have liked to have made this time last year, then get stuck in. 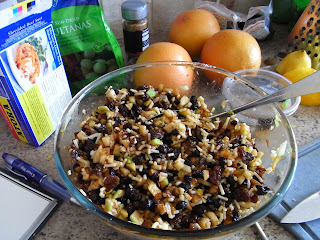 With some apples I have made a few jars of home-made mincemeat. My favourite use of this is stuffing the centre of apples before baking. 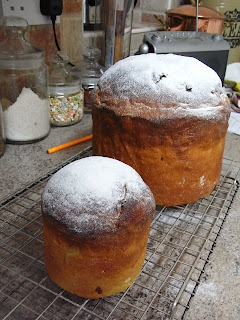 When Mr S rolled over the large pumpkin which has been sitting in the conservatory, and saw that it was creating a dent in the carpet, I realised that it was time to 'deal' with it. Having carved it up and shared it out with another friend there has been more than enough for us. I have baked it down in the oven, frozen pieces of the baked pumpkin for use later on, and made huge amounts of delicious soup flavoured with either chicken or ham stock and bits of meat, and finished with coriander.
I also decided to have a trial run of my version of Panettone, using roasted pumpkin flesh......delicious. This time I added green pistachio nuts, dried cranberries, citrus peel and sultanas soaked in rum. The large 'cake' was made in an 8 inch cake tin, with a tall collar of paper to hold the dough so high, and the small one in a steel storage container. The small one went round to Marie-Claire's. Spread with tangy homemade wild plum jam, and freshly brewed coffee, this is one of the most delicious breadkasts, and is now a tradition at home. I shall be making this again a couple of days before Christmas ready for our breakfast.
With having ordered double quantities of walnuts, I have discovered a wonderful recipe for walnut short breads. In the biscuit line, I have also made a good quantity of Amaretto biscuits, and having had the seal of approval from several people, I am going to make a second batch, then having checked the recipe, will post it here.
Posted by Stasher at 15:24