A couple of weeks ago, my Uncle Noel and I ventured north to the land of our forefathers and mothers!  We stopped en route at his son and his wife, my cousins.

Before we got there he and I had a great lunch and a visit to Hardwick Hall....what no photos!  I had left my camera behind...but perhaps this meant I took more in....

At my cousins, where we were made most welcome, I got to taste some wonderful jellies, chutneys and preserves.  We visited sisters/aunts and brothers/uncles with uncle Noel sharing some wonderful vintage family photographs.

On this visit I was given my Grand Mother's pancheon.  I found out later that my grand-mother had this handed down from her mother.  Therefore to my knowledge this was my great-grandmother's.  Who knows it is was new then or if came down from even earlier in the family. I feel honoured to be the current user, and so very grateful to receive it.  It is on account of this blog, and the fact that my aunt reads this, and her generosity, that it is now here.

When he saw first saw it, Uncle Noel said he could remember it standing besides the hearth when he was young, covered with two tea towels.  My aunt has a very roomy and superb kitchen, so it was not until I got it home that I realised how big it was and why it would have needed two tea towels to cover it!

Mr S approves of the place on the work surface where it is on display.  It is just above the under the counter freezer, where I used to keep the fruit basket.  I only realised this year the reason that our fruit ripened so quickly was that it was a warm corner.  Dough using 1.5Kg of flour looks really small but there is plenty of room to rise.  I guess with a very large family, a big pancheon would be needed.  Today Mr S and I went into Warwick, and I found a lovely hardly used vintage Huckaback towel with pretty pansies, at Oops-a-daisy at the antiques galleries.  It is large enough to cover the pancheon nicely. 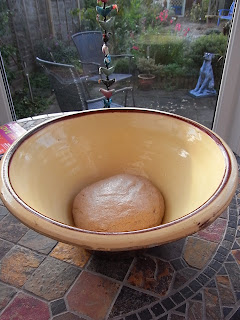 With this dough, I made two walnut free form, two small and one large tin loaves.  Two loaves went to friends. 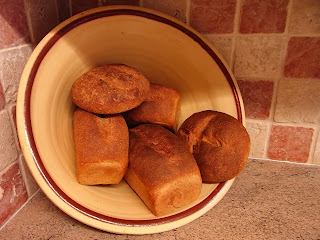 As I left my aunt, I thought it would be nice to ask her if she would like something, and she said that next time I went up, she would like some bread.  I also felt a nice knitting project coming on, and she was delighted when I suggested that I knit her a shawl.  More about this later! 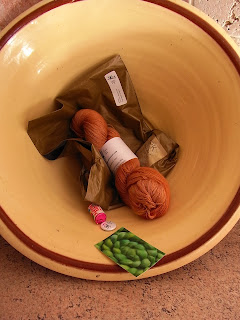