Its a few weeks now since a blanket left here.....I think it was started over a year ago.
A gentleman arrived at our Knit and Natter group, with a huge amount of knitting yarn.  His mother had recently passed away, and she had been a stasher too.  The main part was distributed, but amongst the bags, I spied a couple of packets of Irish tweed knitting yarn, each had the same dark tones, one with orange and the other green.  With these, I thought a nice blanket could be made for someone.  I had only just learnt to crochet squares, and asked if anyone would like to join with me.  Janice, Nicki, and Jacki volunteered, and over the months we croched our way through most of the two packets.

As a result of all of this, and several get togethers here with tea, coffee and cakes, and much nattering,  with several others turning up to encourage and cheer us on, we completed the 'lap rug'. Thanks so much to each and every one of you.

The pattern I thought was inspired  by a simple mosaic in the bottom of a water pool in Pompeii.  I've looked through all my photos, but cannot find it....maybe in my dreams, squares of dark green and red marble with a simple geometric pattern shining through water.... 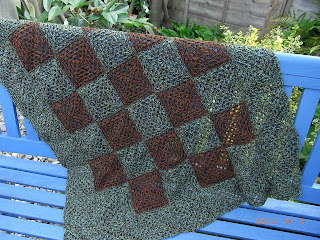 It took me a couple of weeks to come up with the best pattern and to sew up all the 99 squares...then I hand washed and also machine washed, the piece of sleeve which this lady had knitted up, and knew that it would be safe to machine wash the blanket on the wool wash.  After it was blocked...well not tightly but spread over towels in the conservatory, it was time to think of whom we would give the blanket to. 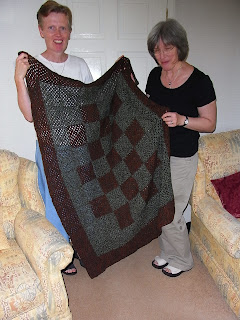 Here Janice and Nicki pose with the completed blanket.  It is now its new owner.  May they feel the warmth, laughter and companionship which went into making this.

Just before the final squares were sewn on, my little Izabelle visited, and grabbed the blanket to put over our laps at story time...I think she also enjoyed playing peek a boo, and being able to see out through the holes....so now I am using up some ends of sock yarn balls, and making a small lap rug for her.
Posted by Stasher at 19:07