In addition to a  batch of multi grained bread, I wanted to bake something sweetish for the weekend.  At our Knit and Natter group this week, I sat next to Ronnie, and she talked about how well her Paul Hollywood malt loaves had turned out.  I have been looking through Malt Loaf recipes for some time, and still have half a jar of malt extract, left from my Banana, Walnut and Malt cake  made some months ago.

I scoured both my Paul Hollywood's Books, but nothing for a sweet malt Loaf, so this must be in his latest book.  At the moment I am trying not to buy any further books, so was delighted to find the recipe on line

So Friday afternoon, just in time for Mr S coming home, and the usual 'hello what is that lovely smell', but a reply from me, saying 'not yet, they are still warm, and any way they will be much better tomorrow'...the loaves were on the cooling rack.

It sure was a sticky affair, and when I make this again, it will be in the mixer, a kind present from Vickie...this time I decided not to take it out of the bowl, but used my Bertinet scaper, again a present some 10 years ago from Vickie, to mix the dough, which also dissolved any bingo wings I may have grown since the last good pummelling on the worktop only a couple of days ago.

I got my two newish Silverwood tins and buttered them well.  Divided the dough weighing each tin and contents to get them more or less equal, and looked at the sad level them came up to in the tins: not even half way.  Once the dough was in I was starting to have qualms as to whether I ought to have lined the tins with parchment.....but the dough was so sticky I decided to leave them in the tins and work out how to remove them later. 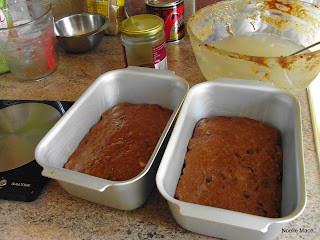 There is no second rise, and it does say a couple of hours....some ironing, a bike ride and my shopping done, I came back to find the dough had risen to the top of the tins.  You can see that it really needed a more thorough mix! 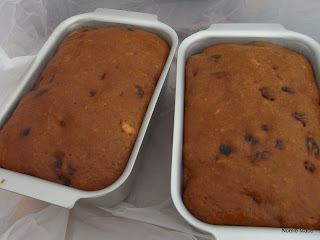 When I got the tins out of the oven, I thought it was going to need a knife round the edges to dislodge the loaves, but I turned the tins over, and rested them on the rack, so that the steam went round to the bottom of the tin, and a few seconds later, they almost self released...et voila, perfectly cooked, and released. 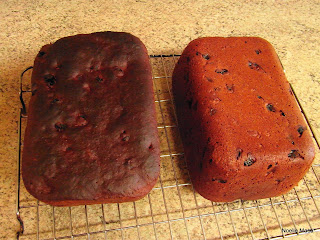 We've just have a buttered slice each with our afternoon drinks, having just come back from a foray to the Leicester area to view model railway layouts and a big steam engine.

The structure is perfect, the loaf less sweet than a shop baked one, and very satisfying.  Mr S read out a nice letter a few days ago from the Radio Times in which a viewer praised the latest PH shows, and mentioned the piles of washing up, and their kitchen covered in flour etc.....its the same here...but its all worth it.
Posted by Stasher at 18:19