Another bake from the Facebook Group Challenge:  for the second half of May it is Monkey Buns.  When I 'have' to make something, so many things go through my mind beforehand.  Yes I really love pecan nuts, love cinnamon, love enriched buns, but also Mr S doesn't like cinnamon, or, so he says, and there are so many buns all stuck together, 24 of them!

When I realised that I had invited a near neighbour Lita and a new neighbour Dave from several doors down,  to come and see the garden and choose some plants for theirs, I realised this bake would be just the nicest thing to have with coffee on Sunday morning.  What a coincidence, Dave who moved in recently just happened to have worked with Lita several years ago, and are now neighbours.  Small world!

Sunday morning was an early start as my dearly beloved was going out for a full day on a hobby course on airbrushing at Pendon and I was up at six.  So I calculated that the bake would be out of the oven by 11 am just right!  I hoped they liked cinnamon and nuts too.

Even the enriched yeasty dough, with eggs, and vanilla and butter filled the house with enticing aromas.  I followed the recipe, and after the first rise, started by making first my four equal portions 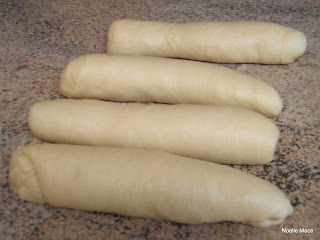 then the smaller 24 balls were made into 'tight' balls.  With Jane Mason's explanations, I have now mastered the action, and got through the lot quickly.  Yes no flour on the work surface is the key to getting perfect tight balls. 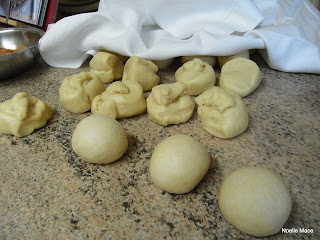 I decided to toss the balls in the sugar and cinnamon which was not covered in the recipe, as well as sprinkling it between the layers together with the nuts, which was.  I think next time I would roll the balls in some of the melted butter too, then they may be easier to pull apart.  However first time round on a recipe I try not to depart too much from the instructions.

After the final rise, on went the butter, now the smells were just divine, and this was before the baking. 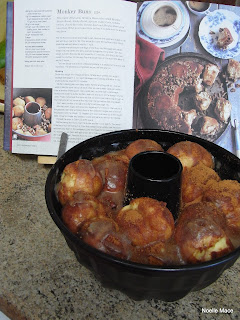 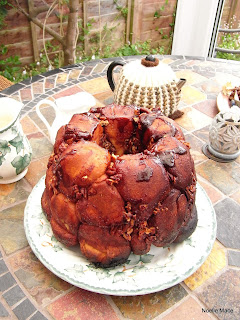 but I did not count!  Later I gave more away to another new neighbour, and there were about 8 left when my hero returned home.  Of course he wanted a taste, and more than one was enjoyed.  I wrapped them up in some foil, and gave them a gentle warm through.  Again he was surprised that he liked the cinnamon.  I think his dislike of cinnamon comes from over cinnamoned pancakes when the spice is uncooked.

The last four were sliced up, layered with sultanas and a few more pecans, with egg and milk mixture and transformed into a delicious bread and butter type pudding.  No extra butter, but a good sprinkling of brown sugar and cinnamon on top.  To 'cap' it all,  the desert was served with a dollop of double cream and a drizzle of maple syrup.  Was I getting close to making something akin to my favourite pecan plaits?