Orange Tip misidentified by me as Dappled White Butterfly

A couple of days ago, as I went out to hang out the washing, I loitered in the garden as I do, and on the lovely tulips saw an unusual insect, I wasn't sure if it was a butterfly or a moth, but I know I had to try and capture it with my camera.  I had not seen one of these before, and understand that they are not at all common.  But I was wrong...this is an orange tip with its forewings folded back. 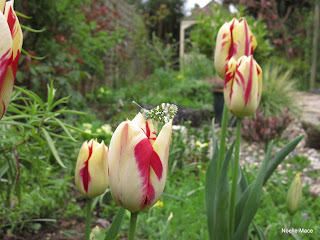 I have been trying to find out what it is,  and jumped to the conclusion that it may have been a  Dappled White.  I probably thought it might be as it mentioned Warwick, and we are about five miles from Warwick. 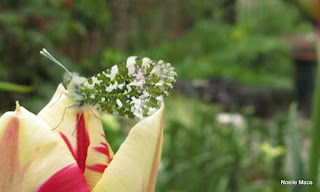 I didn't quite get the quality of picture I would have wanted, but did not want to scare the butterfly off nor trample on my emerging herbaceous plants.  Since looking up this butterfly, and seeing what it looks like with its wings open, I feel sure we had them flitting around the garden last year.  This one looked as if it has just freshly emerged and was drying out its wings in the sunshine.  It does say that the last butterfly was caught near Warwick in 1948! 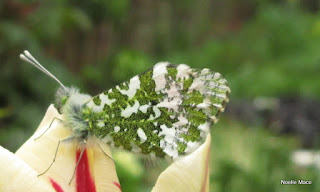 I had excellent feed back from David Moore, from UK Butterflies.  This is what he wrote:

Your butterfly is not a Dappled White though. It's an Orange Tip (there ARE various species of 'Dappled Whites' but none are found in the UK).

The male of this species has unmistakable orange patches on his wings which, when seen in flight, rule out every other British species. The females are identical except they lack these orange markings, and at first glance could be mistaken for one of the other 'Whites'.

Orange Tips are common butterflies, widespread throughout the UK, but they prefer damp areas where their foodplant grows - Cuckoo Flower or cardamine pratensis. If you have this flower in your garden (or you have the close relative - Honesty) then this might attract both male and female Orange Tips.

The butterfly will tuck its forewings behind its hindwings when at rest so it's hard to tell which sex it is, but if you saw it in flight and didn't see any orange then it was certainly a female.

Coincidentally, I photographed a roosting male Orange Tip this afternoon, and have attached an image for you to compare it. You can find out more about this beautiful species of butterfly here:

A very nice visitor to have in your garden!!

Each year we have orange tips..at least the males visit the garden..but we don't have any cuckoo flowers or honesty.  I shall have to grow some for them!