Yesterday was quite a Friday....the house was clean and tidy and ready for the second day of viewings.  Yes we have found a new house and this one was on the market.  I cleared all out the litter bins, washed out the waste food bin, and just as I was selecting some fresh newspaper to reline it, came across an old weekly Waitrose Paper, and glanced at a recipe for a bun.

I am such a fan of buns, and this being Friday I thought I would bake some.  I made the cardinal mistake of putting the milk on to heat, forgot about it, and then it boiled over!  Burnt milk smell when you are trying to sell a house is not the best idea.  All the windows were opened, and soon with the extractor fan on full pelt the house was back to normal.

After the third and final visit I started to make up the buns.  The recipe is really worthwhile making and can be found on the Waitrose site if you search for

I had no mixed peel in the cupboard, but found a little jar of my home made attempt at candied lemon peel, and used 50g of that instead.  I had no ginger in syrup, but soaked some candied ginger in water until it swelled up.

As I was kneading, the phone rang, and we had our first offer for the house.  During proving we had a second offer from a different person...and before the time for the buns to go in the oven, the sale was agreed, subject to contract of course. 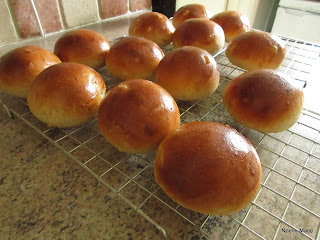 Martha's recipe is worth baking and these buns are really delicious.   Her recipe gives 8, but they would have been huge...I made buns of around 70g each.

When Mr S came home from work it was time for tea and buns, and lots of talk about the day's events.  Ought these to be the first buns I bake in the new house with a different oven?
Posted by Stasher at 16:12