I had started to write up about our holiday in April when we spent a couple of weeks in the Spring in Madeira.  Looking back I can see that I had not even scratched the surface, so if I have time over the next few weeks there will be more about our various trips.

I love yeasted breads and cakes, and when on holiday I am always on the look out for local delicacies.  In Madeira, we both fell in love with Bolo de Caco, a small flattish bread which is cooked on a stone or griddle over a wood fire, and we saw some being baked on a beach.  We had Bolo de Caco in various eateries, having first had it suggested to us when we were booking up our day trips, by a lovely English lady who had lived in Madeira for several years.

We used to give ourselves the challenge of a long walk, and then finding the best place for lunch, on our lazy days when we were not walking along scary trails which had precipitous drops to one side or the other!  This place a few miles down the coast was our best find, not only did it serve up a delicious lunch, but it had lovely views over the Atlantic. 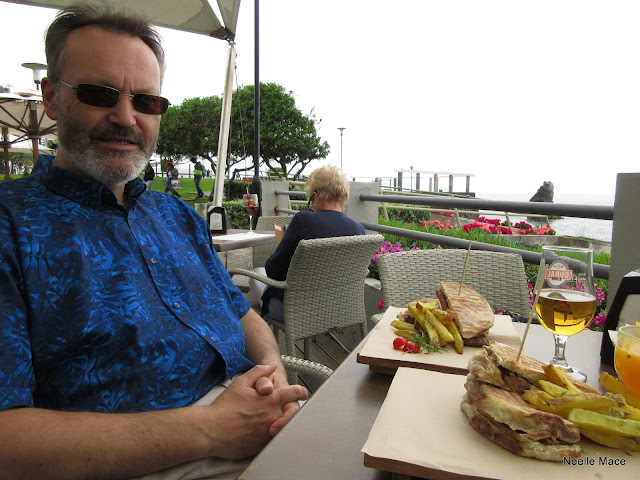 A barbecued thin steak marinated in red wine and garlic, cooked just right and served in a bolo with caco was served up.  It was the passion fruit punch for me, and beer for him! 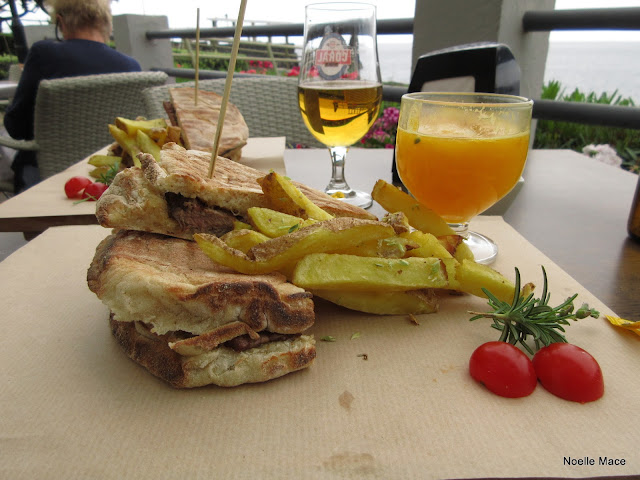 Just a few days ago, I found the 'white' sweet potato for sale in Asda, and knew straight away what I wanted it for.  I have looked up several recipes for Bolo de Caco on line since our return, so had an idea that in essence, it is a sourdough bread made with flour and sweet potato, the white variety rather than the yellow one which is the most common one in the UK.

I roasted a couple of sweet potatoes with their skin on, and let them go cold.  The following morning, I decided to get started.  I weighed one of the large potatoes, and weighed double its weight in flour.  I took half the potato's weight in active white wheat sourdough mother.  Next time I make these I'll weigh everything and update this.  I mashed up the potato with a fork, but next time I'll process it with some water to get it smooth.

To the sourdough starter, I added the sweet potato, and half the flour, and some water to make a very soft and almost runny dough.  This was left to mature until the following morning, when I added a little salt, the remaining flour and sufficient water to give a very soft dough.  After ten minutes or so of kneading, I left it to mature another two or so hours.

It was still very sticky, so I was not able to get out the camera to take pictures.  Using floured hands and cutter, the mixture was portioned into about 100g pieces, and then shaped into rounds.  I had put some flour in a cereal bowl and after a couple found it quite easy to shape by putting the piece of dough in the bowl and turning it over and patting it down.  Then they were left to rise on a well floured tea towel, and then covered until nicely fluffy about another 2 hours.

I got the griddle heating over two low flames.  With four on the griddle at a time, I left them to cook gently, turning them over a few times. 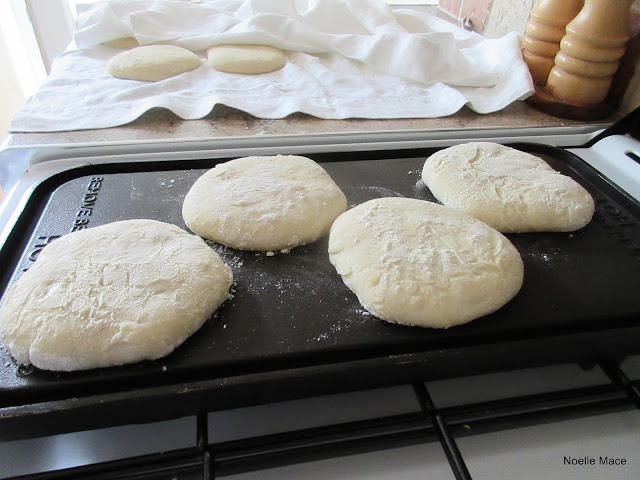 as each batch got cooked, I balanced them on their sides and kept twirling them around to get the edges baked. 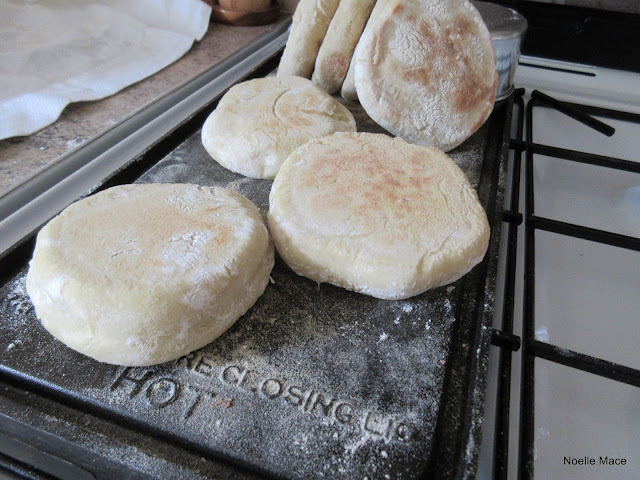 I read on one of the many blogs about this great bread that one is not meant to cut them, Miguel Forte gives a good recipe but with yeast rather than the sourdough version which I personally came across on Madeira.  He explains about going round the edges with a fork and then open them up to give a rough surface which I imagine would then hold the garlic butter beautifully.

I had made some extra large turkey burgers, and when cooked, topped with fried red onions and home made mango chutney, we sat down to enjoy our meal, and talked about our holiday in Madeira.  As usual most are now frozen and ready to bring out and enjoy.
Posted by Stasher at 22:24