As I write about this delicious bun, Kenilworth is 'celebrating' the 750th anniversary of the siege of Kenilworth Castle.  Over the next two days there will be all sorts of entertainments and enactments at the Castle and Mr S and I are sure to pop our heads in there.

An hour or so ago, I thought I could hear the cannons going off, but it was the slow approach of a thunder storm, which is still raging on.

Since I can find no mention of a Kenilworth Bun, I name this bun in honour of the Town where we are living at the moment.  If we were supporters of the sieged army, we could throw some of these over the walls at night to keep hunger pangs at bay.....but the smell of  baking would have drawn the besieging army, and the house would have been ransacked...I'm so pleased it is 750 years after the seige!

It all started with a lovely bag of plums, grown in Kenilworth, by my friend Janet.  At the time, just over a week ago, we were rather pushed for time, so instead of making jam or chutney straight away, I slow roasted the plums on trays in the oven, then just froze them for later use. 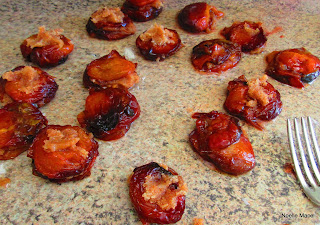 For Friday Bun Day, I felt inspired to 'invent'  this new bun.  I had tried to shape them as I did for the Apple Buns from Jane Mason's Book of Buns.  Most of them I felt fairly confident of having closed in the plums, but for a few which proved trickly: tricky with the plum juices trickling out, I put them seam up in some buttered bun tins. 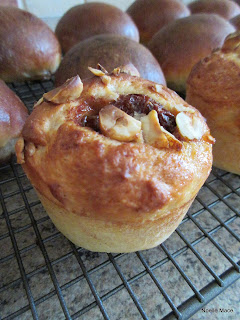 It is these seam up buns, topped with hazelnuts which could have been picked from the local hedgerows if the pesky grey squirrels had not beaten me to them, which I name Kenilworth Buns. At the time of Kenilworth Seige there were no grey squirrels in England.   I wonder whether my friend Nick at Crustum's would like to bake these buns and start a lovely tradition for the town.

You can use your favourite sweet soft bun dough...there are many versions which include a little sugar, I used 50g only to 475g flour, 50g butter, and an egg, milk, water and yeast of course, and just a little salt.  This amount made 16 buns...50g dough per bun.

For the filling, I used my very slowly roasted Kenilworth plums, and when they were cold, sandwiched them with a paste made to taste with 30g butter, soft brown sugar, and a little cinnamon.  The buns were egg washed before baking for about 15 minutes at Gas No 7. 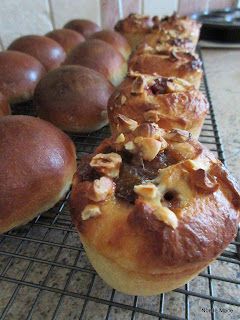 I called Janet and she came round to fetch a large gooseberry bush in a pot, and pick up some buns for her tea...she did not come emptied handed but with a lovely bag of runner beans and courgettes straight from her allotment!