In a Vase on Monday - New Beginnings

Last week when we were on holiday on La Gomera...during part of the day when it was too hot to go out, to pass a little time I went to visit my friend's blog.  Cathy got me started posting and linking my little posies from the garden from June 2015 on her theme of In a Vase on Monday.  Even though I had been posting posies from the garden earlier, it was fun posting more or less weekly, and seeing what other gardeners were coming up with.

What a coincidence...Cathy used some of the variegated London's Pride which I had given her which she had admired in my Kenilworth garden when she visited.  Saxifrage umbrosa Variagata is a lovely low growing evergreen plant mainly used as a ground cover plant.  Its flowers are light and airy but come just once a year.  I had managed to take a few offshoots from my Kenilworth Garden, which are now coming on well in a pot.  I saw that it was mentioned on one of the recent coverages of The Chelsea Garden Show.  My plants originate from offsets from a friend's garden many years back.

Its New Beginnings here in Wells in my new Garden, and I shall find the right place for the Saxifrage.  It will take me a couple of years to get things going, during which time I shall have to tackle the issue of perennial weeks, and garden design and layouts etc.

However Cathy has inspired me to start posting again.  This is my 50th In a Vase on Monday....and to return the 'favour':  Persicaria Red Dragon, originally received as a rooted cutting from Cathy, makes an outstanding component.  I did leave the main plant in my garden, and this is from a cutting I prepared as soon as we started house hunting.  If you leave the stem in water it grows roots fairly quickly...and hey presto another plant to give away!  There are plants in several gardens in Kenilworth propagated from Cathy's Original. It seems that I have lost the knack of taking a clear picture...but you get the idea here...new beginings for all three plants, all plants are from cuttings from the mother plants in my previous garden.  Lonicera nitida Baggesen's Gold also known as Golden Honeysuckle, Cathy's Persicaria Red Dragon, and a flower spike of Euphorbia x martinii Ascot Rainbow.  I have read that a common name for spurges is wolf's milk!  Again this is from a cutting of the mother plant originally bought from Avondale Nursery back in 2014.  I decided to cut off the one and only flower spike early on to help the plant bulk out and establish itself.

A close up of the flower structure shows up the colours which go so very well with the Percicaria. 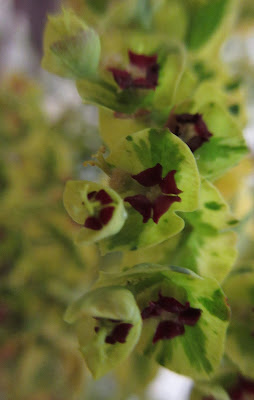 Looking through an upstairs window, I saw this bullfinch snacking of the berries of the Amalanchier...hope they leave just some of the fruit to turn red! 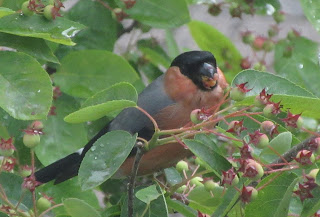 Many thanks Cathy...for lifting my spirits, and getting me back on track with posting to In a Vase on Monday.  This week your contribution is as ever....interesting not only for the lovely flowers but also a few gardening pointers such as the time to sow cosmos to get flowers in June.
Posted by Stasher at 11:06

Labels: Garden, In a Vase on Monday, Plants