When I see a shrub or other plant that I really admire, although I may not at the time have made a note that I can always put my hand on, when I see it a second time there is a 'SNAP' moment.  Snap like the card game we used to play...yes I have seen it again, and Snap I must get it!

I saw a well placed specimen of Loropetalum at Hunningham in Peter and Margaret Green's garden, which I visited this time last year.

However in my period of restraint before the layout of the garden is fully established I resisted.  The next time I went to Morrison's they still had some rather well grown specimens, and that I remembered that in the Green's garden it was being grown in a pot by their back door. 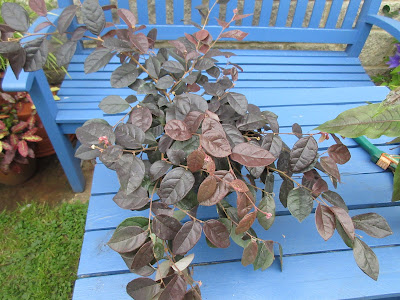 Here is my Loropetalum Fire Dance, waiting to be planted up into a larger ceramic pot...and during the winter it will be by the front door, where has a westerly aspect and a canopy which holds the warmth from the stone of the house, will give it the protection it needs.    It is an evergreen Chinese Witch Hazel, with very early pink flowers.  The new leaves at this time of the year are a deep marooney colour, and the backs almost duck egg blue...yes, I had it against the newly painted 'beach hut' and they matched.

The  Fothergilla gardenii Blue Mist  I had doesn't seem to have survived following its extreme scorching of its leaves.  For now it is has had a light trim in the hope that it recover.  So maybe to Loropetalum is a replacement for the 'shrub of interest' in a pot! 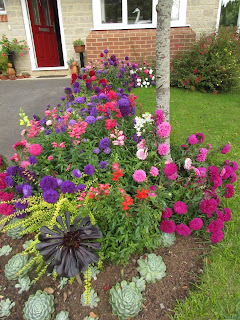 The little Aster plug plants which also came from Morrison's, have been show stoppers in the front garden, and have yielded many bunches of flowers.  At first they were inter-planted with some antirrhinums, but lately they have stolen the show.
Posted by Stasher at 11:45