In a Vase on Monday - Shapes and shadows

On Saturday, I was getting rather excited preparing for the visit of two IAVOM friends the following day, and felt a little gardening would calm me down.  I wanted to start the preparations for planting out new snowdrops and later I attacked an old potentilla shrub that miraculously survived builders as the conservatory was under construction last year.

Here we are Alison C and Sandra D and myself...very cold but enjoying good company, winter gardens, and snowdrops. 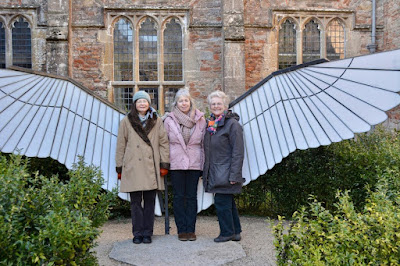 Sadly the the lovely angel sculpture within the Palace has been moved....but here it is from when I posted about a visit in 2017 .  I have a thing for angels in the same way that Sandra has a thing for pineapples.  I am sure she will be writing about her Pineapple experiences in Wells! 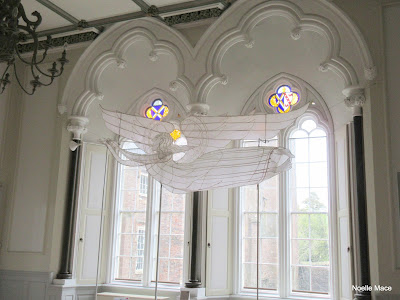 At first I didn't particularly like this shrub, and would have had it out, except that Mr S liked it.  It would therefore seem quite disingenuous of me to dig the Potentilla out whilst he was away running model layouts at the weekend with friends!  Besides which, I felt it had earned a little reprieve having flowered its little socks off almost until Christmas.  Usually if I like a shrub or plant I carefully research and prepare for the best way to reduce or transplant it...if I don't, I usually just go for it.  I have since read that from time to time Potentillas do need a seeing to and will bounce back from even the harshest of prunnings....so it will recover, but maybe not flower until 2019.

I got busy with the secateurs and quite soon what was once a shrub a metre high and across became much reduced.  As I worked through the bush I became to appreciate the shape and curves of the woody stems, and saw the first sign of spring growth.  I chose some stems and 'pushed' them into a lovely  studio vase which my father brought back from Japan in the 1960s. 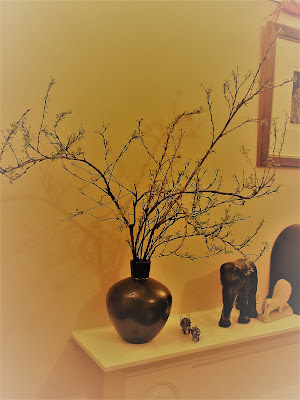 The shadows on the wall too added to the interest, but I have neither the skill nor the patience today to show this to advantage and have just added one of those tones available on the photo storage system I have.  The black elephant again is pottery from my Husband's family home, and the two little keys rings, skillfully made from wire and small beads,  were brought as souvenirs by my sister after her holiday in South Africa. 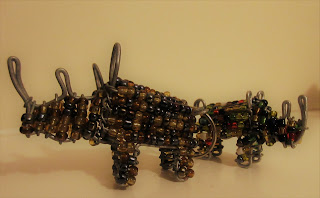 The stems reminded me of the thin leaved scrubby trees we used to drive through, in one of the drier regions in Mauritius near Black River, where,  as children we would imagine we were driving through African grass lands with  acacia trees with rhinoceroses and elephants.  We had no television in those days, but we had large books with black and white pictures of landscapes from around the World, which I often had my nose in.  We would even see Lions in the clouds.

I am sure you would like colour and for that you will be enchanted by a flower originally from the same continent as the rhino, so head off to Cathy's post this week.  Cathy is the creator of IAVOM....and without this post I would not have had such a special day with two new friends.