Most of the country is in the grip of icy blasts, and until yesterday we had no snow here near Wells.  Then it started.... 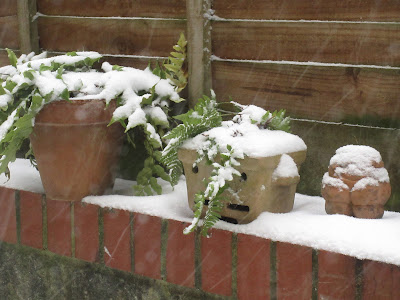 By about four o'clock yesterday it had started to settle.

It snowed all night with snowflakes smaller than I have seen before...instead of the mizzle, which is what we call the very finest rain, more that mist and less than drizzle, Mr S and I devised the name snozzle for this finest of snow.  As I looked out in the evening it was as if a ton of jewels had been cast across the snow surface as twinklings lights reflected off the surface.

The wind has been blowing all night in gusts, moving this fine stuff into drifts, sometimes catching a sizeable buildup on a roof and making it into what looked momentarily like a whiteout as the snowdust remained suspended in the air.

In the morning, the views from upstairs were uniformly white, and neighbours were busy clearing axel wide tracts...even though no vehicle has entered or left the close.  Children were using the icy furrows to fling themselves down the 'luges', the laughter and joy was infectious!

In the afternoon heavier and larger snowflakes started to fall and having enjoyed watching the birds from the windows front and back, I decided to don hat, gloves, boots etc.  Mr S cried after me: "Is your journey necessary?  Is it a question of life and death?"  I replied: "yes yes!", as I went into the garden to spread more birdseed, raisins, and chopped up apples from the store.

We had been watching the birds and I had noticed that around the perimeter of the garden, fieldfares, redwings, blackbirds and thrushes had been busy clearing the snow to expose the heavy composted soil looking for worms and food, and finding perhaps warmer hollows in which to shelter from wind.  One had more or less tunnelled right under the fence to the next door garden..that is where I remember all the snails like to congregate!  I have never before seen so many of these birds in the garden together at the same time. 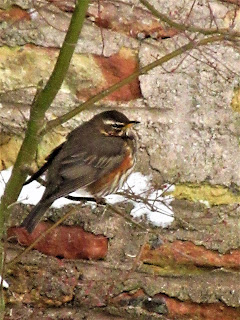 This picture of the redwing is taken from inside the study right to the end of the garden...so many apologies for the poor quality from my simple camera.  Of course the batteres for the better camera are flat...but they are now on charge, and I have set a couple of hours aside tomorrow to refamiliarise myself with its many functions.

We have each taken full advantage of the enforced isolation...I got out some of my pens, which have very sadly been laying idle for nearly two years..and I am sadly out of practice.  However you have to start somewhere...I've decided to make all home made birthday cards this year, and I wonder if this little fanciful sketch will end up in one? 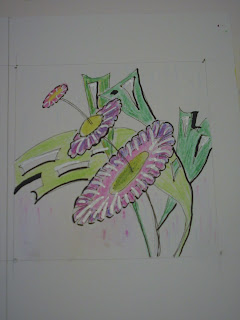