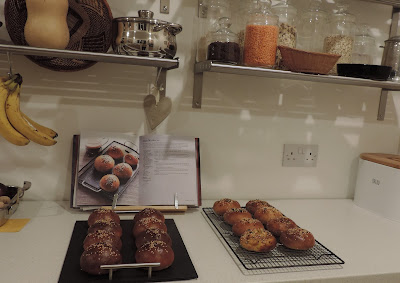 Yesterday's bun baking jamboree in the snow included Masala Buns from the Book of Buns.  This recipe was amongst the last ones set in February 2017...and just over a year later I'm finally baking it.  Mr S really thought the smell of the filling was wonderful.  With spices and chilli, lunch with a bun each and other tasty morsels will help warm us up...well the house is rather cosy, but a nice hot spicy bun is just the ticket! 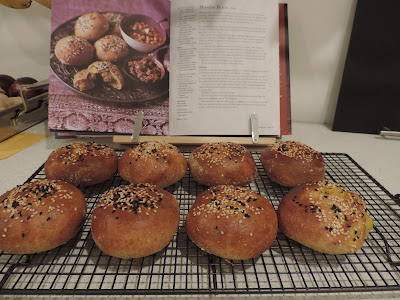 Isn't it a coincidence that both the recipes have a mixture of black and white sesame seeds. I chose half wholemeal and half white wheat flour.  Now that I have followed the recipe exactly, next time, I shall allow my inspiration to make little tweeks: maybe nigella seeds on the top, and fresh coriander in the filling, perhaps pumkin instead of potato in the filling.  There are other recipes in the Book such as Khara Buns and Kahvalti with nigella and feta...all rather delicious savoury buns which on rebaking I have fused the ingredients and come up with many permutations.
Posted by Stasher at 12:36