This is the last of the recipes in 'Perfecting Sourdough' in the long list set for the Facebook Page.  I have baked almost all of them, those I missed out were because we were moving or had the house totally upside down.  I kept this recipe to be the last one as I love the association of herbs and plants and Rosemary is for Remembrance, and the picture of this loaf is also repeated at the end of the book.

Both my wheat and rye sourdough starters are really reliable.  I refresh them every three weeks or so, and often use them to top up other standard yeast bakes I may be making.  This was one of the tips my fellow moderator Nigel.  Another trick I have tried at last with this loaf, was baking in a closed roasting tin...similar to using a dutch oven.

I have also learnt and understand how the dough feels when it has been sufficiently kneaded, seen how folding at intervals really does help the dough to stand up.  What I still feel lacking in confidence is the turning out and slashing.  Some times I feel confident and go ahead, if not, I just use baking tins...the bread tastes equally good.

I started the refreshment part of the starter mid morning, when I also set the raisins to soak in the remaining water together with the chopped rosemary from the garden.  This meant the water had taken on some of the sweetness of the raisins and the rosemary.

By 6 pm the starter was bouncy and ready to go.  Before dinner I set to kneading the dough.  Not quite according to the instructions, but following Jane's technique from the book of buns, the fat was added after the initial 10 minutes, and then I folded the raisins and rosemary, before the bulk fermentation.

Last thing I divided the dough into two and set them in cloth lined bannetons, covered them with their 'shower caps', and left them in the cool kitchen.  By six the next morning, I had a peep and were they more or less ready...but I wasn't, so they went into the fridge.

As soon as I was properly awake and the oven hot enough, out came the first loaf from the fridge, it was very light and airy, and I was concerned that it may have been just a little too far gone. So I just brushed it with egg and didn't score it.  I'm pleased I used the Bannetons with their cloth liners as that made them easier to turn out.

I watched it rise, and decided to try the technique of baking the second loaf in a closed container.  I have an oval stainless steel roasting dish with a lid which I used.  I am so pleased that Jane Mason recently gave guidance on turning out the loaf onto a large sheet of baking parchment, then using the paper to manoeuvre it into the tin.

Not actually being able to peer at the loaf rising through the window in the oven seemed disconcerting at first, so I was totally relieved when it was time to take off the lid for the final fifteen minutes of baking.  The loaf look marvelous, and felt really light when it was ready to be turned out and left to cool.  It felt lighter than the loaf baked on the baking sheet, even though it was bigger.  I put them on the scales and it was actually heavier but felt ligther and spongier in the hand. 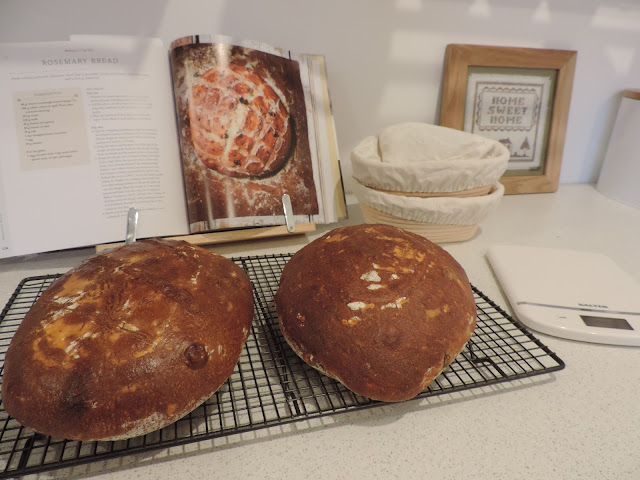 We don't usually eat anything in-between meals, but I could not resist a slice when it was time for coffee, and Mr S definitely did not want to left out.  The aroma, taste and mouth feel were bliss. 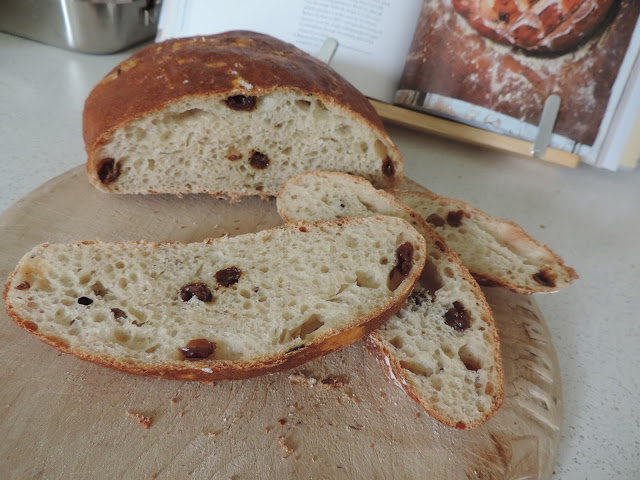 Perfect with goat's cheese and grapes.  Lunch was just soup and fruit....


Some of the recipes I have now baked many times, as they are so easy.  My favourites are Do Good Loaf, Mixed grain Sourdough and all the ones based on Rye Starters particularly Finnish Rye.  The 100% wholewheat is amazing, and whenever I buy craft Stoneground flour, bought on my visits to mills, this is the one I use to really get the full flavour of the wheat.  Often I scale up the recipe to yield two or three loaves, which are either shared with friends or frozen.  With options within the recipes for different flours, sweeteners and fat, there are even several variations of most to be tried.

From starting in May 2016 I feel that my sourdough technique has really Improved...not perfect, I just 'knead to keep at it'!