In a Vase on Monday - Getting outside

Its early January, we have just had our first frost in the back garden, sufficiently hard to knock back the nasturtiums, fuchsia, and Salvias.

A few steps into the garden to hang out the washing usually leads me to looking around the garden.  I know the rule is to leave the garden alone, but I really felt like ripping up all the soft and saggy nasturtiums and low and behold the sign of shoots from bulbs beneath brought joy to my heart.

Around the Hydrangea Paniculata growing in a large pot, I had planted a few embryonic cyclamen about three years ago.  They were giving a nice little show, sufficiently to spare a few blooms for my little ceramic vase.  A couple of leaves of other cyclamen, and two leaves from a little native evergreen fern.

The fern is called  Asplenium trichomanes or Maidenhair spleenwort and is a native everygreen fern which is very hardy. The little bright green leaves come from a nearly black central rib.  I've seen this growing in cracks in walls.  I love this little fern which I bought a few years ago, and have it growing in a pot where I can admire it.  During the summer, I move the pot to a sheltered and shady spot, and even in the few instances that it has dried out, a good soak in a basin of rainwater has revived it. 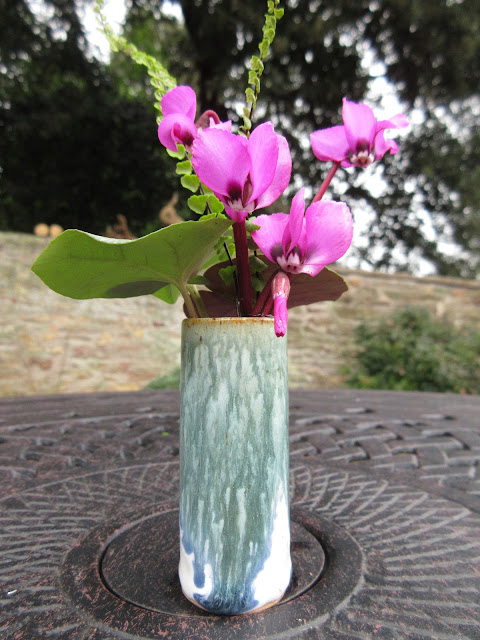 For this week I am grateful to IAVOM for getting me outside.......not just to pick the little vase full of early spring flowers, but to photograph the vase.  Inside the light is just far too poor.

Cathy has posted her first Vase too for 2019, and is in the pink!  Do go and spend a few moment checking not only her vase but others too.

Labels: ferns, In a Vase on Monday