Time again for the weekly Six on Saturday, a great ploy dreamt up by The Propagator, allows us to join together with six items on matters pertaining to our gardens. Others link in, and it a great way to share and learn, and also ask for help, as I have done in item 6.  Beware that it may lead you to seeking out new plants, such as Helenium 'short and sassy' which is one of the Prop's items this week.

Changing gardening gloves and choosing to wear good and clean ones only(1)  I have been in the mood for sorting out and tidying, all thanks to friend Mandy who introduced me to Marie Kondo's Life Changing Magic of Tidying.  Having sorted out a lot in the house, I was going to work on the shed, then the garden.  Then I read Karen's post about her injury in the garden, my mind was made up.  Karen posted this as a reminder to her gardening friends to be aware that help should be sought quickly if you think you have an infection from a cut or similar.  It is a salutary tale for sure.

I mentioned the issue of wounds in the garden, and a friend who happens to have been a GP says the most import thing is to wash hands wells and apply antiseptic as soon as you realise that you skin has been punctured.  So do not carry on regardless.

All the old dried curled up gloves, even the leather ones are now ditched, and my clean new pair, has been given a special place, where it is easy to find, and also put away at the end of the day.

First French Beans of the season (2) were ready to pick on Wednesday.  Having a small garden, a wigwam of Fasold beans gives height to the small patch I call my Potager...posh name for a narrow strip which grows a few herbs and veggies. Unlike previous years they seem to have stopped short of the very top of the poles, but given the strange weather, hot and only hose pipe water, it is no wonder.  If anyone wonders what the copper pipes are going...I just wondered whether this may stave off slugs?  Normally they are hidden by all the leaves, which for the picture were moved aside. 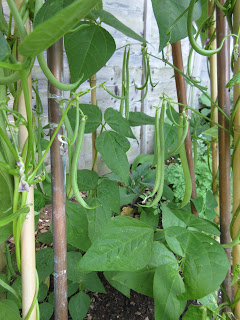 From the first time I saw a Nigella flower years ago, I loved its wonderful structure.  Then I learnt to love its seedpods.  I saved some seed from a friend's plant, I think it was from Alison's  last year when I admired its pods, and came home and sowed it around the garden.  The seedlings overwintered and, were thinned and spaced around, then from early spring, they grew and grew.  I had overdone it, and I started to dislike the plants as they choked out some of my favourites.  In my sorting out mode, I managed to bring myself to remove the ones in the conservatory border, particularly as they were in bud for such a long time and seemed unwilling to unfurl from the tight white bud, lacking in the surrounding 'mist' of leaves, I felt they didn't have the charm of other varieties.  It was almost ugly in that form compared to other types of Nigella. The plants were dense and upright and at about 1.2m high were crowding out other favourites. 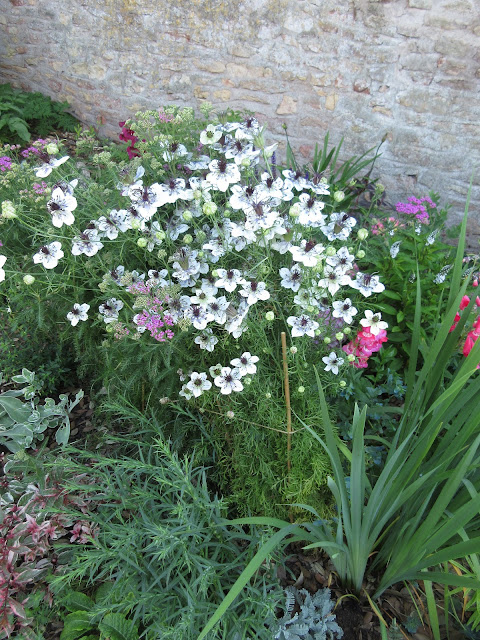 Just in time I remembered that I had promised some seed to another friend, and left the clump growing on the other side of the garden.  Here they have been tied up as they started to splay and weigh down surrounding plants.  This week I have to admit that I sort of like the blooms now that they have opened...and I can see that they have rather 'superior' seed pods forming... 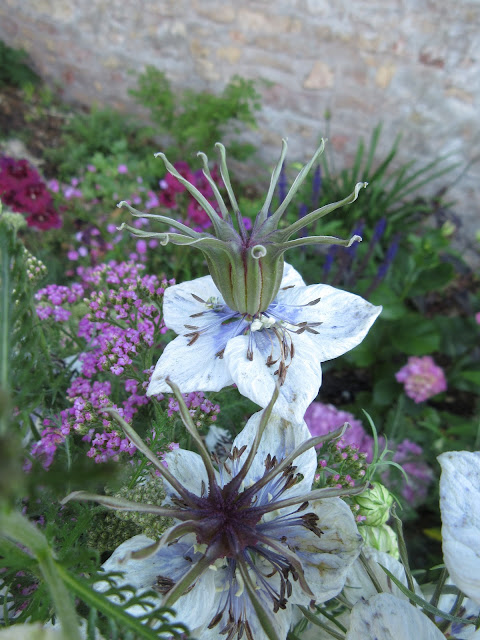 Then as I looked through the flower stalks I found some had double or indeed triple seed heads.  Has anyone else seen this abnormal formation?  Maybe it was as a result of all the strange weather or insect damage early on.  I think this must be Nigella African Bride (3). 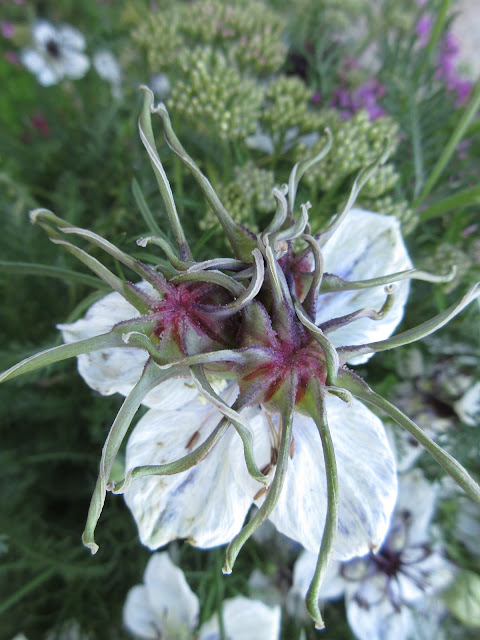 For a few years I have been growing my own tea.  Not being able to tolerate standard black or green tea anymore, I have turned to an alternative lemon verbena: Aloysia Citrodora (4a).  I brought a plant down with me, and also have a bush propagated from it which is now three years old.  Strangely although a very late shrub coming into leaf, the one planted in the ground which has survived two winters in the ground was the first to come into leaf.  As the potted plant has required much watering compared to none for the plant in the ground, it too will be released into the garden after it rains!

Just it it comes into flower, I cut the majority of the stems hard back to about the second leaf.  The leaves are dried, and two bushes give more than daily tea needs for most of the year.  I also use the young tender leaves chopped on fruit and also in cakes.  I can have two to three harvests each year.  The flowers have a very good flavour if picked whilst the pollen is fresh. 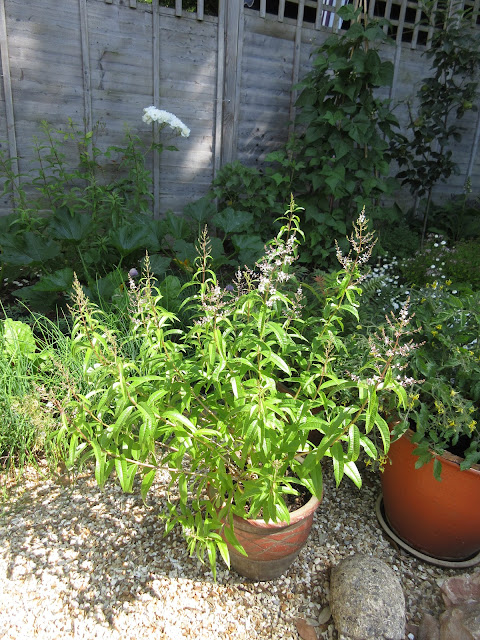 I mentioned some chamomile which had grown far too high again, most probably due to too rich soil a few weeks ago.  In a couple of other patches I have a different cultivar likely to be a low growing chamomile (4b) the sort suitable for seats and lawns....but I failed to clip it and it has flowered....and I read that the flowers are still fine for tea...so I shall harvest that too before clipping it, and seeing if it is to my taste.  I have only ever had 'commercial chamomile tea'.  Again the plant was from a little clump from Alison, which I separated out as soon as I got home into individual segments and grew on with great care through the winter before placing them in the garden. 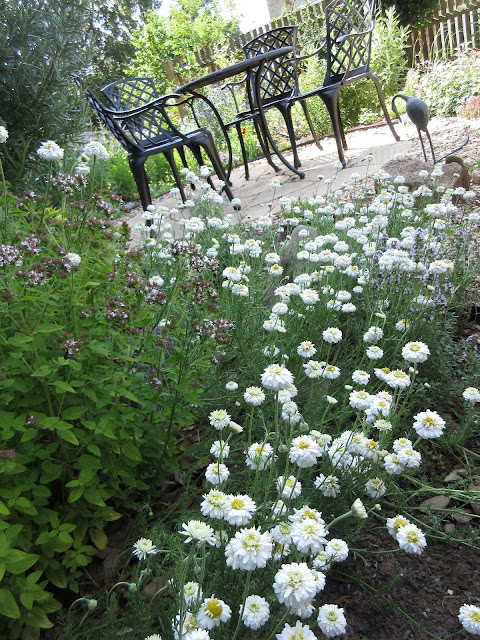 Now for a peep at Sedum Spurium variegatum (5),  renamed as I have been informed by World of Succulents, growing on the edge of the path in full sun on a little slope. It is a good low growing stunner with excellent foliage and pale pink flowers with a cerise stamens.  Earlier in the season the pink and white edging to the leaves made a good contrast with the creeping wooly thyme close by.

Phedimus spurius 'Tricolor', formerly known as Sedum spurium 'Tricolor', is a mat-forming, creeping perennial, growing up to 4 inches (10 cm) tall and spreading up to 20 inches (50 cm). Its small, variegated, fleshy leaves are green in the center and edged with white and pink. The flowers are tiny, star-shaped, light pink and borne in clusters in summer. 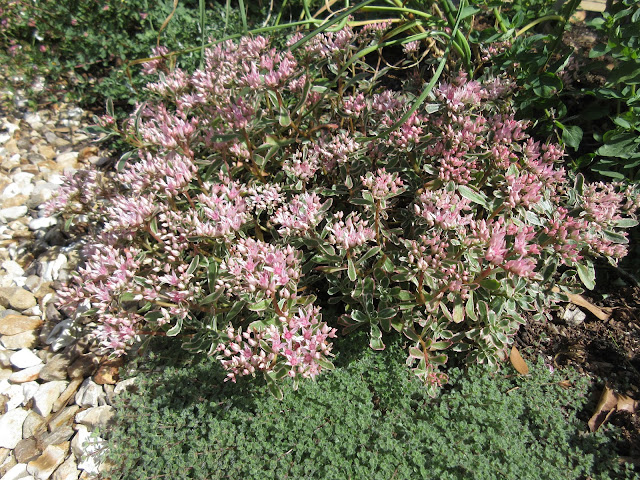 If you are kind, and count the Lemon Verbena and chamomile as one, classed as growing one's own tea, I ask your forgiveness for 'sneaking' in another on the SOS, as I would love to receive advice, comments, or suggestions.(6)  In May I posted about my new Geranium Kashmir Purple, which grew and flowered beautifully.  During the last three weeks after I cut the spent the flower stem down, the leaves have gradually dried out, and nothing is left.  Yesterday I dug the plant up from the hot and sunny border, and the almost tubour like structure is fine and healthy, and the growing points firm with a well defined growing point.  I looked on the internet to see if this is a summer dormant cultivar, or any other indication of this type of growth pattern.  I have repotted the plant in some new compost and will be keeping an eye on this.