For this weekly post, we gather around the Propagator to share six garden related items....a great way to show and tell, learn and help others, get planting ideas and commiserate with friends.

It has been a lovely week.  It has rained!  Still not sufficient really, but at least until the temperatures rise mid week to up the upper 20s, the plants will be reasonably happy.  You could say say it has been 'bellissimo' like this new this year Origanum Bellissimo (1). Reading  New Zealand's Hill View Rare Plant's account of how this plant was found and brought to market is an added interest.


Tortworth Plants based in Gloucestershire is one of the small growers that come out to Rare Plant Fairs in my area, and on an off chance I contacted to them a week or so before a local fair, and asked if they had any special Origanums and this is how I came to get these.  I have a great love of origanums, seeking them out in the wild on holiday and admiring the wild ones in grasslands around here.  They are very much appreciated too by flying insects in the garden. 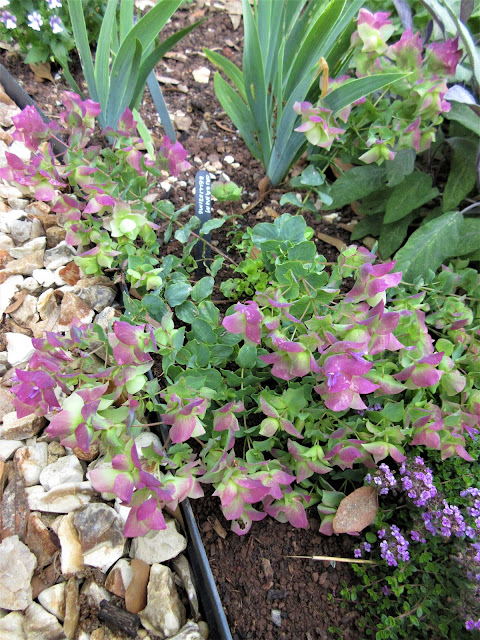 The second origanum they brought along was Origanum Bristol Cross (2).  It has taller growth  with strong wiry arching dark stems and  small dark green glaucous leaves. 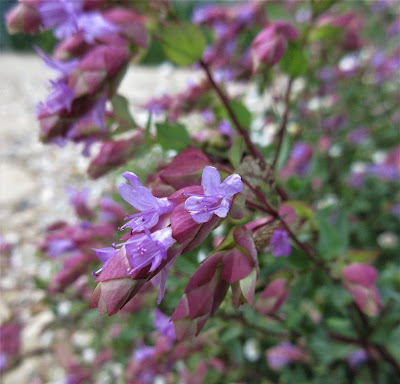 The calyces are long deep pink and the flowers mauve, and hang down in slim panicles.  It is doing well along this sunny edge. Before planting out I added a little compost and for sure measure some coarse grit also to the clay soil. 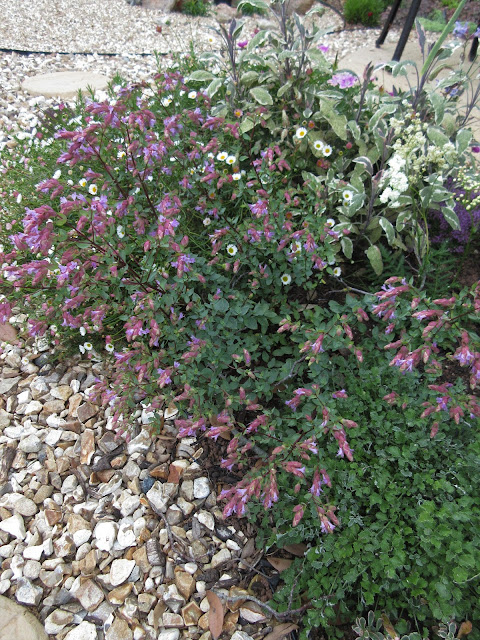 I would have loved a clump of mid summer flowering primula such as I saw growing at Alnwick Castle, but this is what I have to look at instead. The Primula alpicola var alba (3) completely disappears for a long period and emerges late in the spring.  During this time, I wondered whether it has survived, and the crown in walked over by the birds and serious trampling by heavy wood pigeons.  I shall have to move the plant, I think. 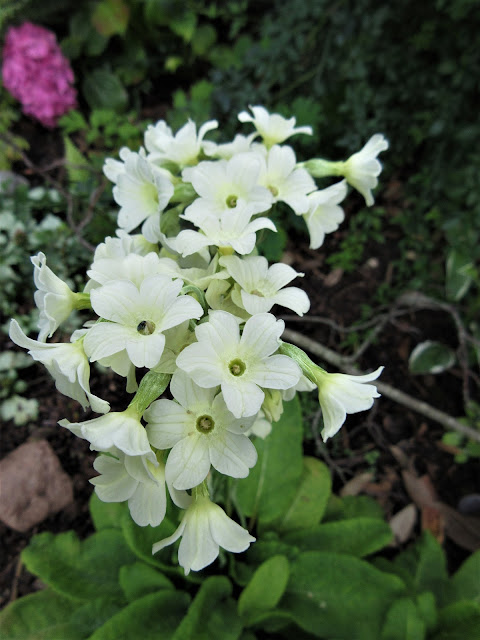 It is well worth getting down low, not only to look into the blooms but also to get to find where the lovely perfume is coming from. They grow in a candelabra form and are covered in a fine white dust, here washed off by the rain.

Whether it was because of this, I don't know, but the first very fat and strong flower stems emerged looking seriously deformed.  The word the botanists use is Fasciation.  Maybe I ought to have left them and observed it.  To protect it next season, it will have a good mulch and a covering of twigs.  It did have a weak protection but the pigeons carried off the twigs for their nests. 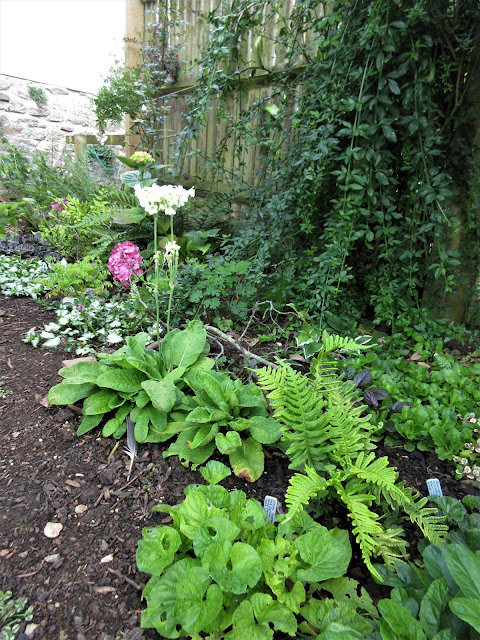 Thalictrum delavayi splendide(4) is doing nicely.  I placed it here last year just because there was a little piece of garden and there it stayed as the rest was being cleared and developed.  It came to me as a freshly potted on seedling from Alison, and I kept it in its pot during the first winter as the garden had not yet been planned.  From the conservatory we can see  it rising plume like, and in the half light of the late evening, when we chat after dinner, it stands out very nicely against the dark holm oak behind it. 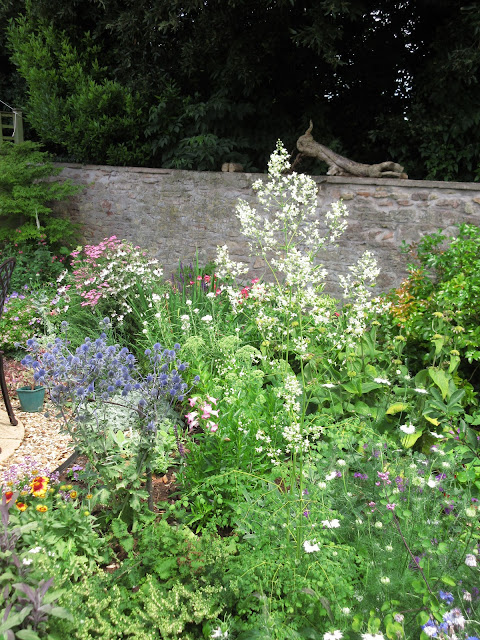 In amongst this growth at least a pretty white love in the mist, with lots of mist: Nigella (5). I collected the seed from one which came from a packet of mixed seed several years ago.  It has a little purple stain at the base of the seed pod. 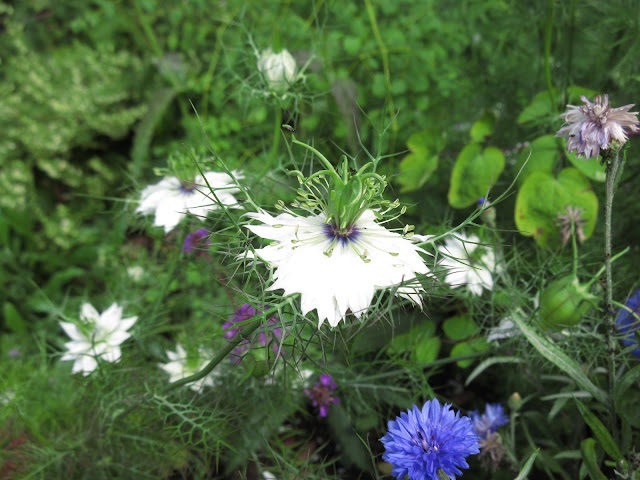 Whereas we have been enjoying several meals with good handfuls of French Beans, the runner beans are just yielding four or five beans at a time.  At least they are setting but not quite at the rate I had hoped with this self fertilizing cross.  For now the white flowers of Runner Bean 'Moonlight (6)  look attractive in the garden.  The flavour however is very good.  I think next year I shall start the seeds a little later, probably mid May. 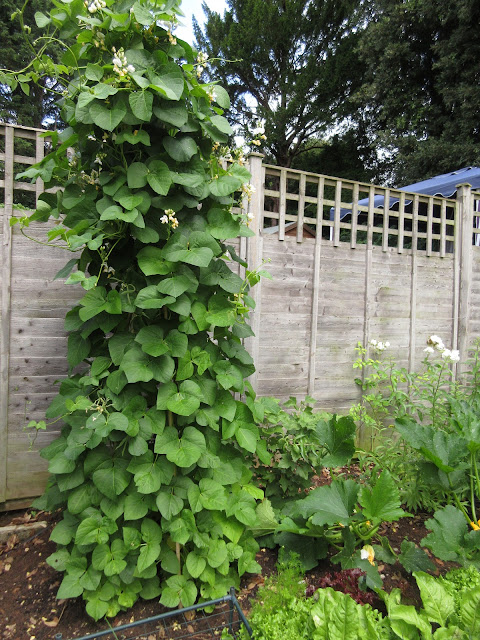 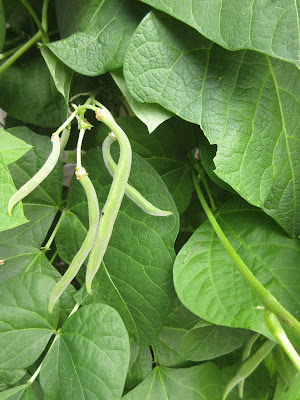 It will be lovely to get into the garden now while the days are a little cooler, and more time to do things other than watering.