At last some rain...almost too much.  In between squalls but not on the days when we had non stop rain, the gravel paths have been a asset, meaning I can get out into the garden.  The watebutt is completely full, and dust washed off plants.

As I write this post and am yet to see what others have entered, I wonder if there have been light bulb moments, or other mid season challenges from The Propagator who hosts this meme, and other gardeners....we shall see.  Interesting viewpoints and musings will be there to pour over during the coming week for sure.

Choices have had to be made regarding which plants please and perform, and if not, I have tried to weigh up their merit and gone ahead in some instances and removed them entirely.  It is not that they are unhealthy, or not good plants, its is rather a question of their relationship with other plants in garden or their position.  The garden is too small for the number of plants I have, a few have been binned this week! 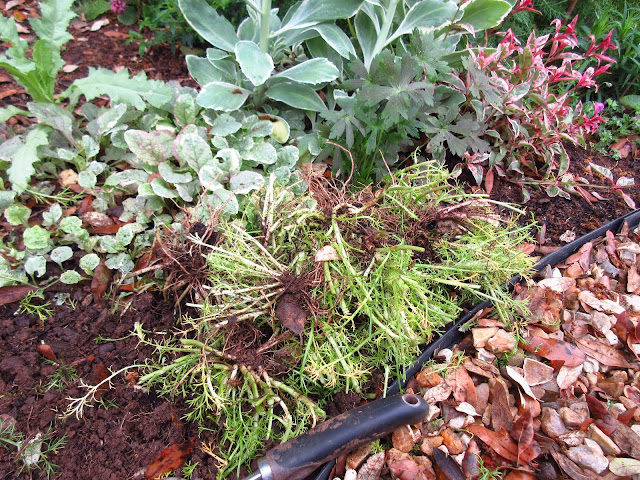 1.   The first plant to be removed was the single chamomile.  It had grown too lush and tall, over 30cm high, and was yet to flower.  I was envisaging a low growing green swath with some nice double flowers, but that was not to be.  So out they came.  I do have a lovely lower growing double flowered chamomile which came to the garden last year, gathered as little plant whilst visiting a friend.  Just the sort of sharing that I love....a simple small division the sort that is gathered with a trowel from the edge of a larger patch which one had admired. No plant pot or potting compost, or time spend looking after it,  just a little bit of damp newspaper is all that it needed, then it is straight home to be cosseted, until it is nicely established.  As soon as I was home, the piece smaller than my palm, was teased apart, and every little joint grown in a well draining medium under shelter, to provide a dozen or so plants to plant out early this spring.

2.   The second plant to go, was to be the golden feverfew: Tanacetum parthenium 'Aureum'.  Just coming up to flower, its stems were encrusted with black fly.  There were far too many blackfly to spend time squashing the bugs away even with a gloved hand, and really they had just been fillers during the winter.

As I pulled out the first plant, I remembered that in spring I did admire the lovely yellow green growth on the golden feverfew. 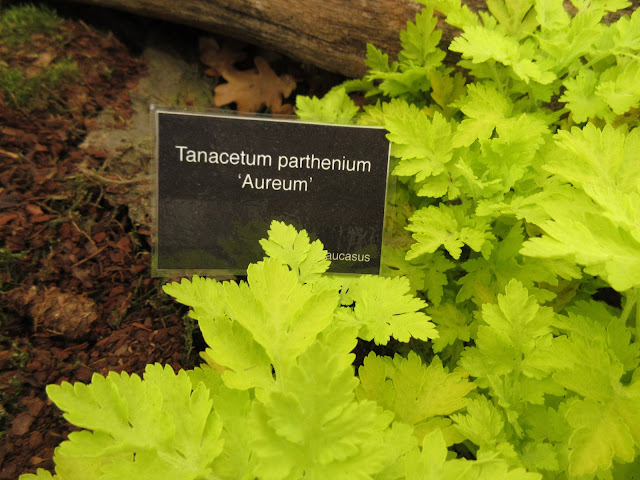 I stopped just in time, also remembering how I was enthralled and beguiled by its looks on a stand at the Malvern Show, only a few weeks ago.  I clipped the other plant, removing the blackfly infested top growth.  Isn't it ironic that a plant that was almost a 'weed', well staged, with a fancy name plate can say: "Look at me am I not just the sort of green that can draw the eye on a gloomy grey day?"

It seems that at least half of my SOS this week are woes....

3.   My third SOS and woe is the sad condition of my a couple of my hydrangeas.  Being almost hooked on propagation, it was with glee I brought back some clipping in the middle of winter 2017, from the Bishop's Palace Gardens, with permission of course, salvaged from what would have ended up on the compost heap!  I had about seven plants root well, even when the gardener there thought they were not likely at all to take at that time of the year....several plants went to Alison...whose garden the camomile came from.  I have three shrubs in the garden. One plant which is not in the shade border, is very handsome indeed, but in the shade border I have two plants, both looking quite stressed. 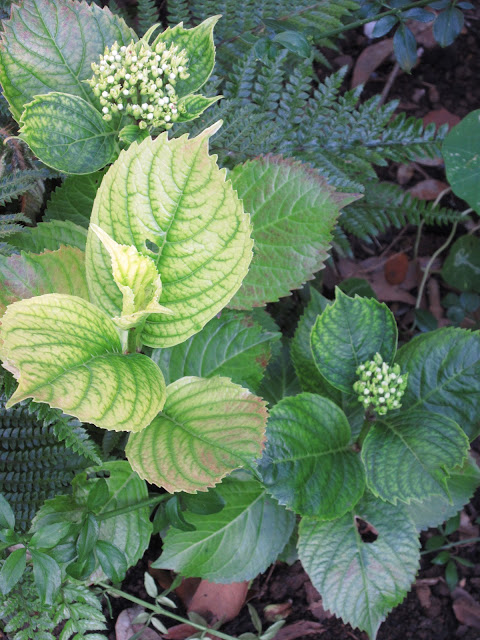 Medicine for now is Seaweed plus sequestered iron, and close observation to judge whether some alternative action would be more appropriate. Again suggestions as to what has caused this and any remedies would be much appreciated.

4.  Looking very handsome in the shady border is Chiastophyllum oppositifolium, sometimes called Umbilicus oppositifolius.  I first admired this in my friend's garden in Kenilworth.  She brought me a little piece as a parting gift, and having been moved a year ago from the sunny side of the garden, it is finally thriving in its semi shaded position.  It is a lovely well behaved plant, with its light reflecting shiny evergreen, fleshy leaves, it is well behaved little gem.  The flowers a pale sulphur colour work very well in a vase too over a long period.  It is quite hardy here in the UK. 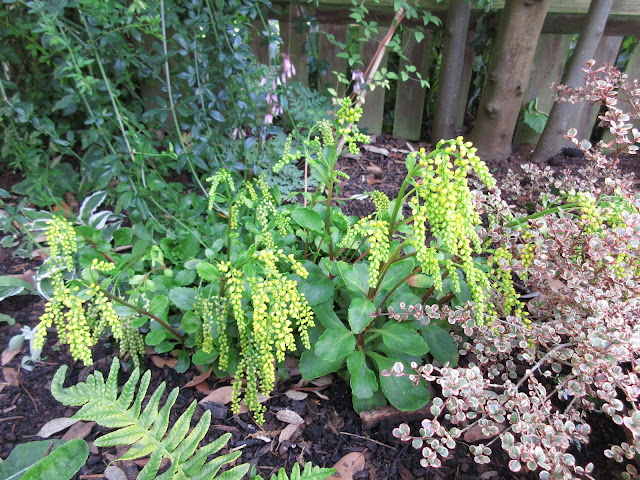 5. Sometimes finding a solution to something just comes around when one is least pondering them:

A light bulb moment!  Whilst tidying the shed during a heavy squall, I came across my roll of copper tape which usually goes round just below the rim of plant pots supposedly to deter slugs.

The thing that had been iruking me was the sight of my damaged pot.  I decided not to throw it away, but to use it to house my three little tumbler tomato and outdoor cucumber plants for the summer, thenditch it.  Unfortunately in my haste, I position the cracked rim towards the kitchen window.  Each time I looked out from the kitchen, the damaged white edge glared out at me.

The copper tape which has a sticky side, is now a 'decorative' rim, hiding the damaged edge.... 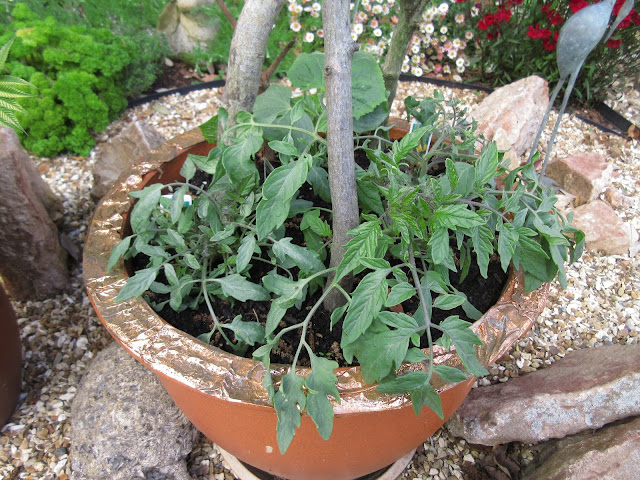 6.  Not just bumblebee watch....but a game similar to the one years ago of how many people can you get into a mini....when minis were still very small cars.  I think this was a game invented in my youth, so that chaps could stand around and watch girls squeeze into their small cars....maybe its because girls have got bigger that minis have got larger...but I don't think that at their current pricetag, many youths would be able to afford them...other small cars do exist!

Anyway around six bumblebees on the white Centaurea Montana Alba is a much finer sight!  One clump was cut to the ground ready for new growth in a couple of weeks, but I had to leave this clump.  Different species of bees seem to congregate on different plants. 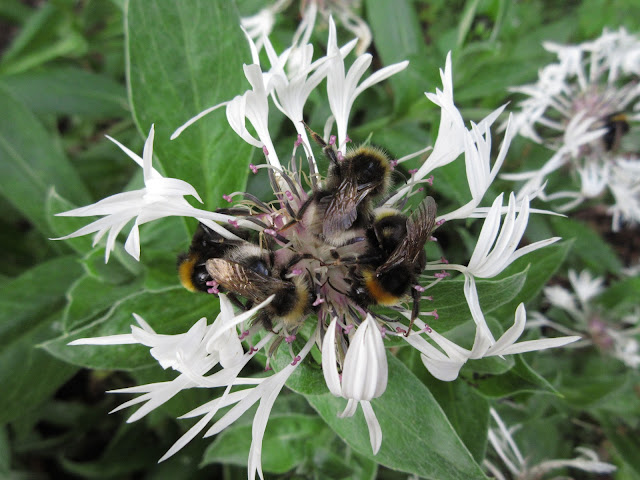 Perhaps if you comment, you would mention if you have been light bulb moments in your garden.  Comments are enjoyed, appreciated, and where appropriate a great help.  So many thanks for them all.