There is something about gooseberries that I love.  I had several large bushes that I was growing in tubs in Kenilworth, but fearing that the furniture or removal men would be damaged, decided to leave them with friends.

I was missing them, and up at Rocky Mountain at the end of March, when I was walking through the nursery, I came across some well branched gooseberry plants.  I wasn't even looking for a plant at the time, I seem to remember a very low price, something like £3.50 each, so decided to get one.  It is an early season variety, and so far it looks really healthy, no mildew or gooseberry sawfly thankfully! 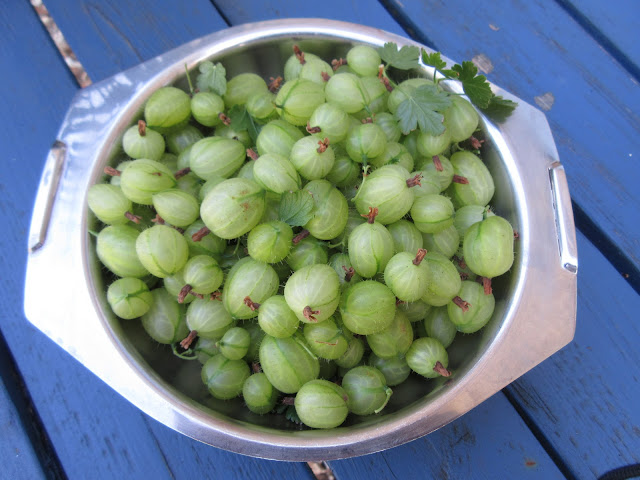 It went into the far corner of the garden...now known as Gooseberry Corner.  The first harvest is always a bit of an event, and 350g is pretty good.  By harvesting fairly early, I hope this allows the plant to put its energy into growing great roots and flowering spurs ready for a serious crop next year.

Making apple and gooseberry crumble for supper tonight....
Posted by Stasher at 18:57