Some reasonable rain showers this week meant that herbaceous plants were not floundering, and it felt very pleasant being able to walk out on the gravel paths to work on the borders, crush greenfly and rose sawflies as they land on stems ready to saw into stems and lay their eggs....

The propagator who hosts and leads this meme will be on the look out for slugs and snails, and no doubt most gardeners will be after this rain.....

The first of my SOS is a view from the embryonic gravel garden area towards our central seating area.  Star plant for the month for me has been the red Dianthus chinensis.  Not only does its red add a point of attraction for me, looking out from the kitchen window or conservatory, each of its very numerous flowers is supporting bees and other insects.  I would have liked to get a picture of a visiting Hummingbird Hawkmoth yesterday, but by the time I found my camera...it had moved on. 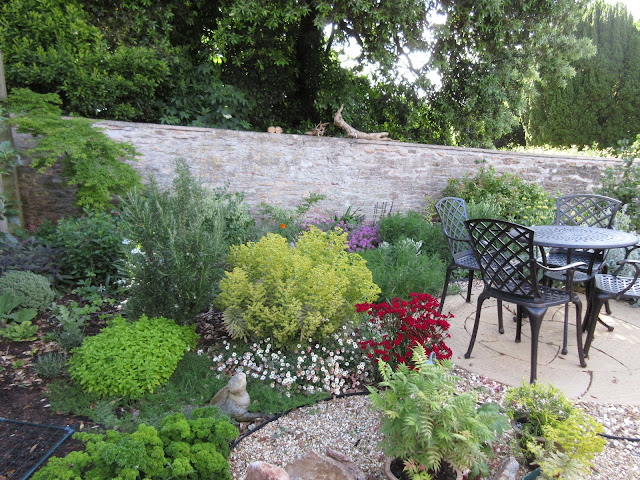 For my second SOS a view towards Acer Corner, along the curving path,  showing the growth achieved in area planted up less than a year ago.  There have been mistakes...such as too many Lychnis coronaria.  To give them their due, grown from seed they are wonderful specimens, but are crowding out choice plants.  This coming week, they will be thinned! 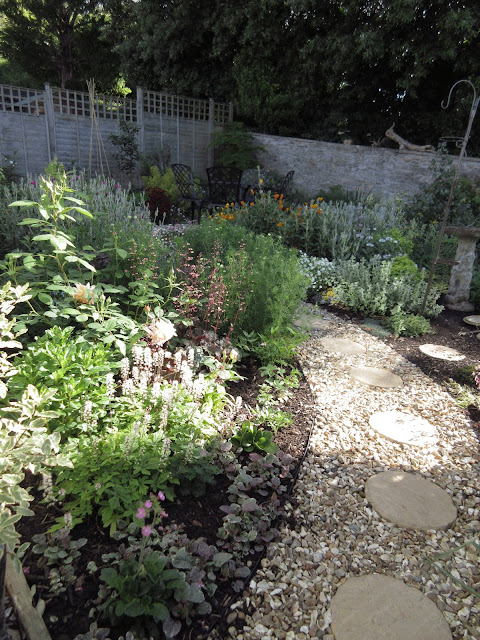 I love Phlomis and for my third SOS show Phlomis purpurea Matagallo. Its the plant with the pink flower spike.  I grew this starting March 2018, with seed from Chiltern Seeds.  I am amazed to have grown a small Phlomis shrub from seed that is flowering like this in just one year.  Something is nibbling its leaves! 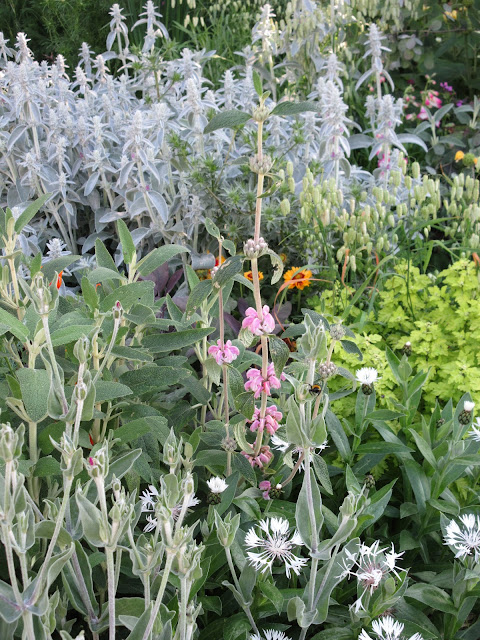 This is on my driest sunniest most open bed.

The fourth item is a large clump of soft grey Stachys byzantina aka Lamb's ears.  I love it for its silver accent lighting up the border in winter,  and being evergreen here gives a good ground cover all the year round.  However at the moment it is rather floppy as the flowers grow up, and weighed down after heavy rain.  As it one beloved by bees I am waiting a little while before cutting it back, reducing it, etc! 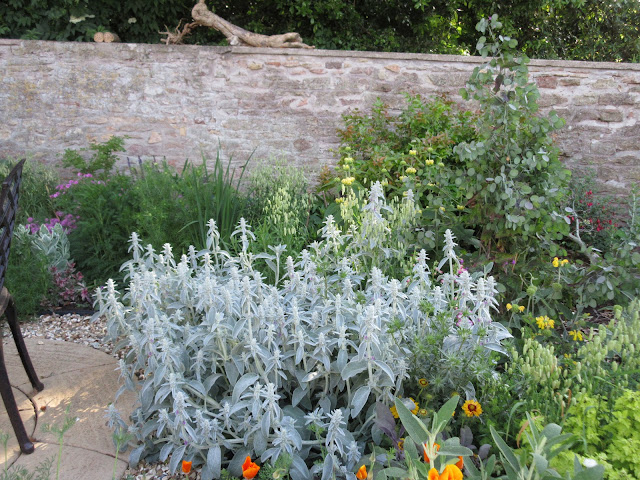 The fifth item this week is a peep at Saxifraga stolonifera, which is going through its flowering stage. 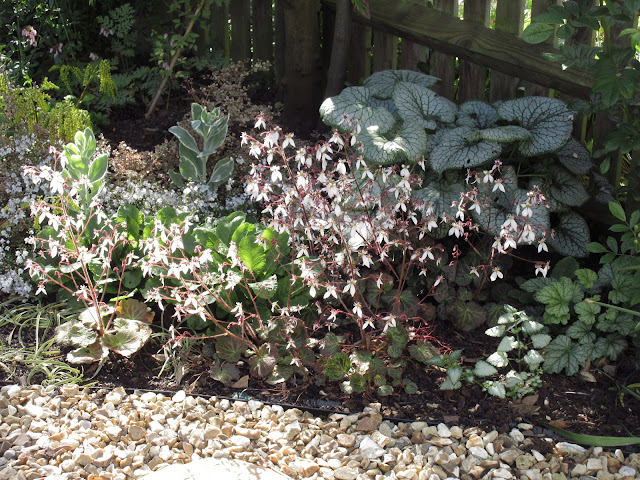 It is growing on the edge of my shady border which does catch the early morning summer sun, and where the breeze makes the petals shimmer like so many small butterflies. It is close to the conservatory and I have a lovely view of this as I have my breakfast in the early morning. 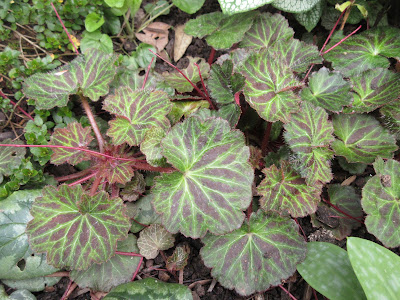 I grow Saxifraga stolonifera primarily for its year round attractive rosettes, but the flowers give an added bonus.  After flowering, the rosettes die off, but new plants from the strawberry like runners soon take over. 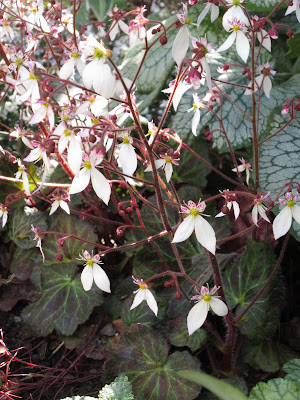 Number six is the clump of Sweet cicely, Myrrhis odorata, this week in the green seed stage. 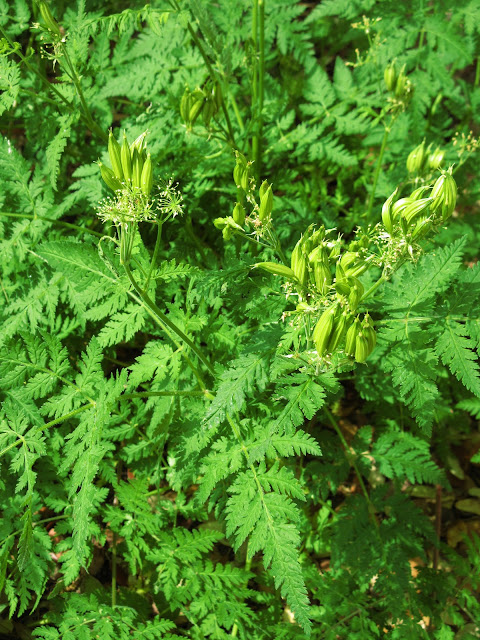 I am rather apt to cut back plants to encourage new growth, and tend to miss out on the seeds.  The fern like leaves grow on a drier part of the garden, partly under the shade of the evergreen oak tree. It flowers very early in the year offering nectar to early fliers.  Just above it on the wall, I've positioned some pieces of wood with holes and several of these are now sealed off by  This coming week, when the plant is cut back,  I shall cut the green seeds, freeze some for later use, and use some in walnut sourdough bread.  They have a wonderful sweet aniseedy flavour.  The sweet cicely came to me as a small plant several years ago from my friend Kay in Kenilworth, and a piece was brought with me, so I am pleased to say that after a couple of years sulking after the move, it is in fine fettle!

Sweet Cicely is not native to Britain but is in fact a relatively recent introduction (neophyte) and was first recorded from the wild in 1777. Although recent it has become well naturalized and is often common around woodland edges and clearing, grassy banks and road verges particularly in the northern half of England and southern Scotland.
I shall be sure to use the leaves too next year,  when my new rhubarb will have grown strong enough to pick.

I'll be sure to see what other gardeners have contributed...if not now, later in the week.