SOS time for posting six items in the garden...a weekly meme hosted by The Propagator...

Yeah!  We have had some rain...at last, enough to half fill the water butt, and give plants a good soaking.  They are popping out of the ground now.

And so are the insects. It been a bit like Spring Insect Watch each time I am out in the garden for a cuppa, lunch, or rest from the painting.

For my first of my SOS: a shimmering green metallic winged beetle.  This is Cetonia aurata or the Rose Chafer Beetle.  It is feasting on the pollen in the Silene Uniflora Alba flowers.  Reading up about their life cycle and place in the ecosystem is another great pleasure to be had from observing the insects, birds and bees, and other fauna that live in or visit the garden. As and when I write about some of the insects I find within other posts, I like to add a label, which later then directs me to all the posts without having to sift through my blog.  I use my blog in this way, as a pictorial notebook, with a good way of finding items, and also by using the search engine.  This is also why I add links etc... 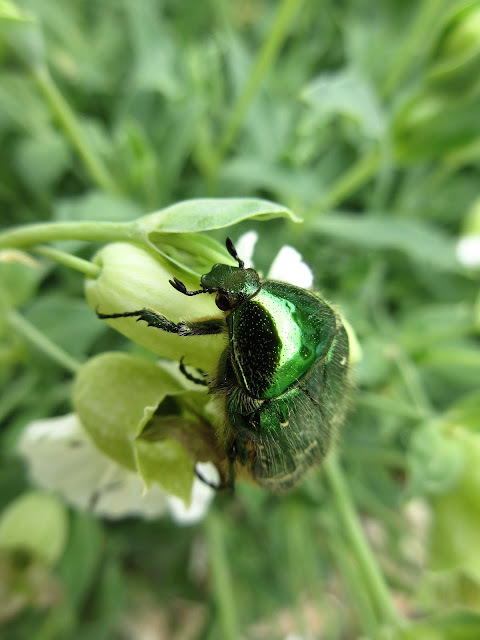 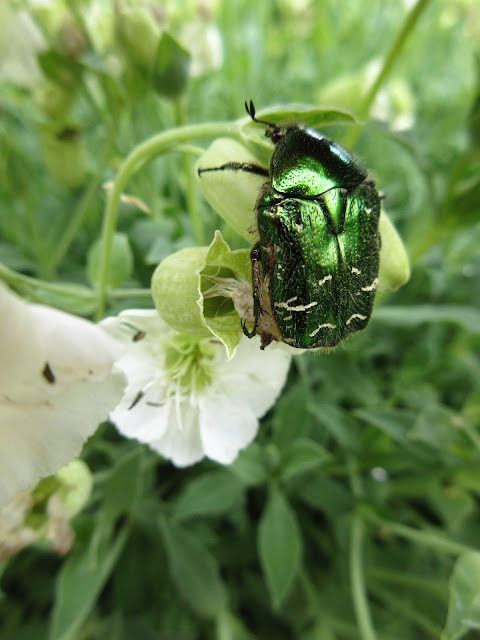 This little pass along campanula, name unknown, from a neighbour, is buzzing with bees in the morning. 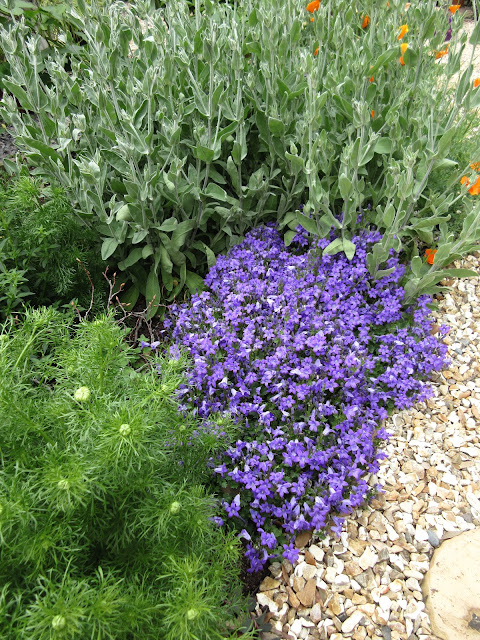 Bees with their sacs full of the white pollen from these blooms, move from flower to flower: 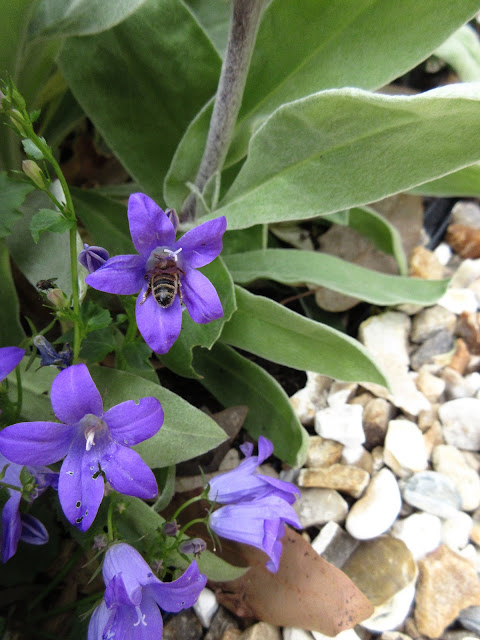 For my third SOS, here is another of my best flowers for interest: Phuopsis stylosa also known as Caucasian Crosswort.  It stays evergreen here, and I like the form it takes.  However I ought to have cut it back much earlier as it has sprawled rather wide.  As soon as the bees stop visiting, it will have the chop.  I bought three little plug plants online in 2014, and made sure to bring some rooted pieces with me.  I had seen it growing for the first time on a garden visit, and then spent a week or so wondering what it was, and ordering it. 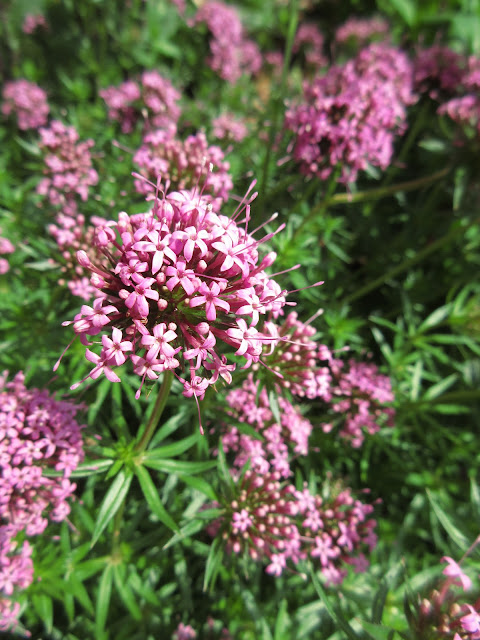 It is just around four weeks ago that I potted up the Pelargonium ardens into my Jacky Duncan pots, and already they have responded by having many shoots, so it holds well as my fourth SOS this week. 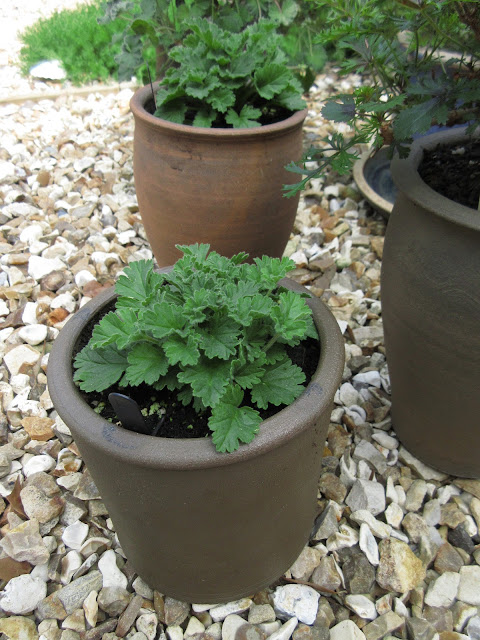 There are more that five leaf rosettes on each plant.  Hopefully this means more flowering stems when the time comes. A couple of weeks after first posting this SOS, I came across a site with some very useful cultural tips regarding Pelargoniums, so many thanks to Woottens of Wenhaston, using bleach to sterilize cut tips will be de rigueur from now on. 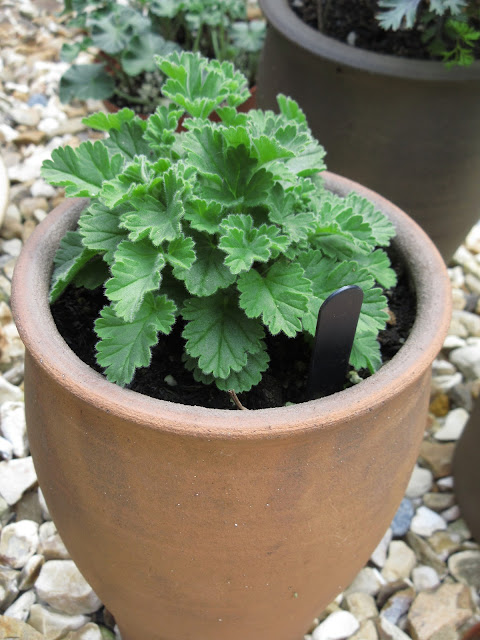 For my fifth item this week, just nearby in the gravel, is our little 'art installation'. 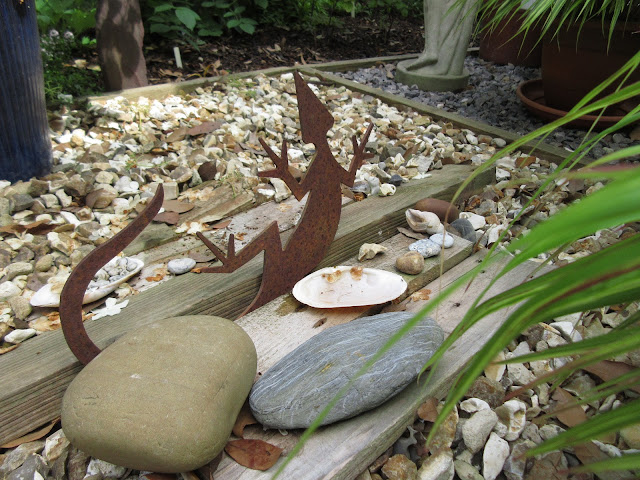 Mr S arranged the little bits of wood that had been used to level the gravel when we  had finished emptying the huge bags of stone,  then  my Rusty Lizzie Lizard and a few of my stone collection added, and all in full view of the kitchen window!  Just meant as a little joke, it has stayed put all winter.  He claimed his Turner Prize....

For the last of my six this week...a peek of a present to myself for my half-birthday!  The post man arrived just as we were finishing lunch.  The table was cleared, the parcel opened....No fear now of using 'blunt' secateurs, tearing shoots, and leaving a cut attractive enough for any passing pathogen to jump into the plant's stems!  As they had a deal with the whetstone, and Mr S had admitted he did not have one when I suggested we try to sharpen my secateurs a few weeks ago, it made complete sense to have the secateur, sharpener combo and some oil too to keep my new tool in the condition it deserves to be kept! 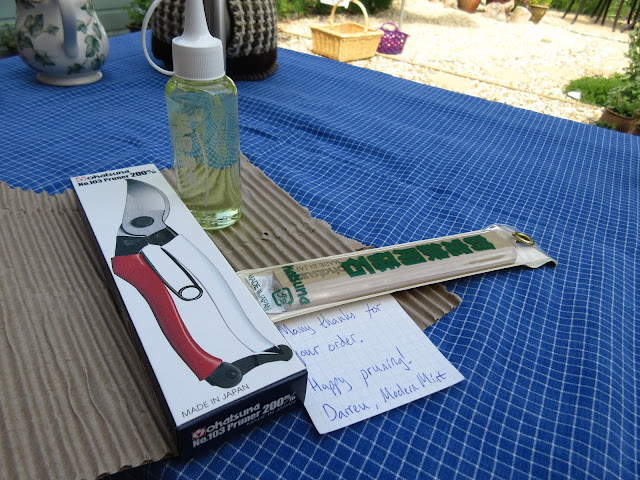 Labels: insects, Presents to myself, Six on Saturday