Mr Propagator  is probably out in the garden surveying the growth in the time he has been away, and in the meantime he has put up some pictures of plants at the Royal Botanic Gardens Edinburgh...

The last week has seen sufficient rain to make this gardener happy.  Early this morning it had stopped and I could step out and take a few pictures. 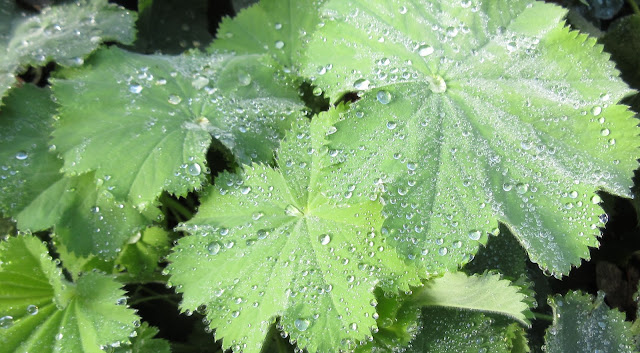 During the low light and wet days earlier in the week, the view from the kitchen window made me appreciate how the variegated plants help to lift my mood, as they stand out, which they didn't quite do in the same way when the sun was strong.  Straight across from the kitchen, just beyond the round table is a little group including Sedum (Hylotelephium) erythrostictum 'Frosty Morn' (1). 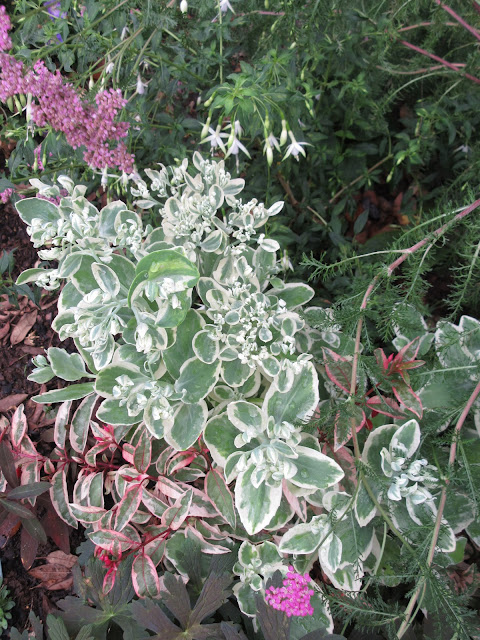 For the last couple of days I have been moving plants out from shelter of walls and even from the house to enjoy a little shower.  I used to have a range of  Sempervivums (2)all potted up separately and named, but now they get arranged as the fancy takes me, in discarded Bonsai pots....I have a spare empty one, and one of the little tasks for next week is to make a selection of the offsets to plant in it. 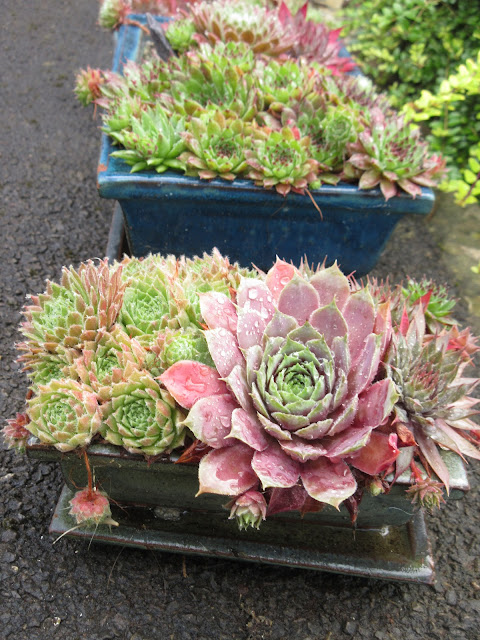 I've made a very slow job of replanting the front garden, due to all the painting and decorating taking place indoor.  On that account I am pleased to say all my gloss painting was completed yesterday.  As we have cleared the turf, I've planted in a very ad hoc temporary way.  Enjoying sowing seeds, and maybe also enjoying and understanding the growth of a plant for one season, I planted one of the little seedlings of Nicandra physalodes (3).  I had admired the flowers and the decorative spheroid fruits on a visit to Hampton Court Castle in 2016, and more recently to Lytes Cary Manor, and the seed came from a friend's garden.   As it has the space to expand unlike the plants in the border in the back garden, it has grown up and sideways over 1.5m across, and has needed staking: 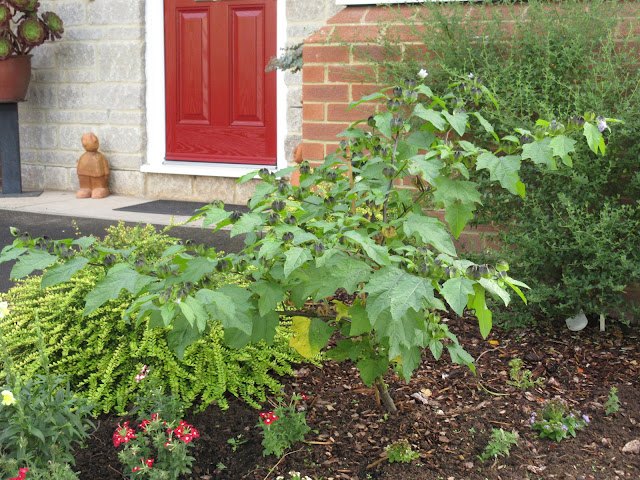 I think it is making growth at the expense of the flowers, which in any case do not last long, and it is the dried pods later in the season that interest me. 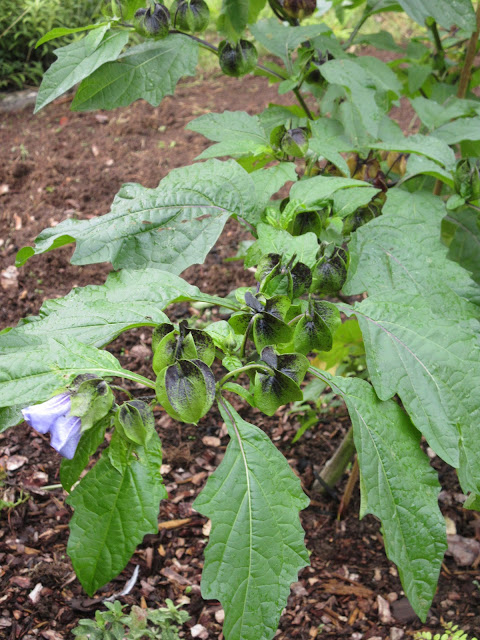 Again in the Solanaceae the White flowered Solanum laxum 'Album' (4)growing up the fence by the conservatory was a bright spot. It has hardly stopped flowering all year and throughout the mild winter.  This was one of Morrison's specials at around £2 bought a couple of years ago.  I've always dead headed it, and having read that its berries are quite attractive, I think this year I shall leave a few to enjoy later in the Autumn 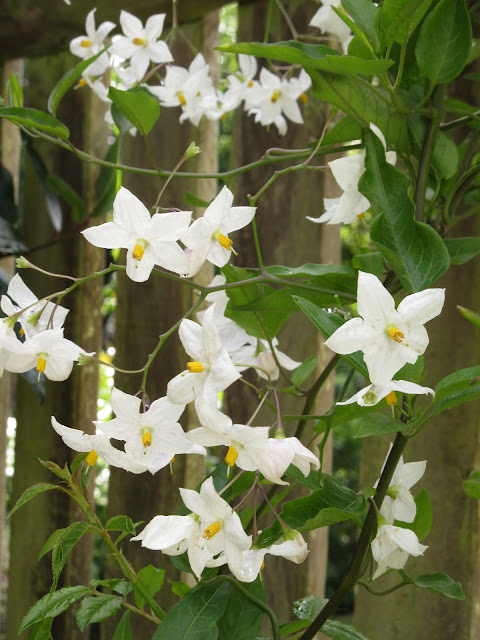 Like the rest of us I love a magazine to flick through, and get a couple of gardening ones delivered.  During the week Gardens Illustrated flopped on the mat, and attached was their free seed packet.  Earlier this year, I sowed some of their free Linaria pupurea 'Canon Went' (5) and have now five good plants, one of which is planted in the border, and the remaining waiting to be placed.  From seed to flowering in just a season, and now I shall have to wait to see how it performs over several seasons, and to see if I planted it in the right place, which is something that requires a little patience. 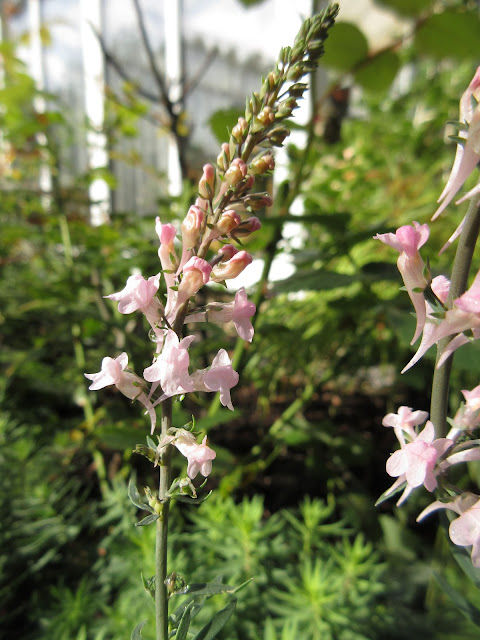 Pelargonium  hybrid sidoides x reniforme “Burgundy”(6) with its soft grey leaves  and long flowering stems, which grow longer and produce sets of flowers, and then branch again with more buds, is in full swing.  Growing in the tall Jacky Duncan pot it sits on the posing shelf with the flowers cascading down. 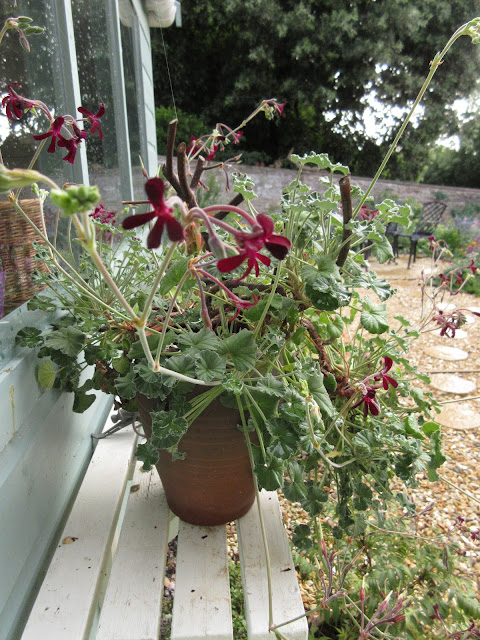 Earlier this year, when the overwintering plant had a bit of a trim, it was an opportunity to produce some replacements.  With a very good rate of success I have re-potted the rooted cutting into two  pots with three plants in each. 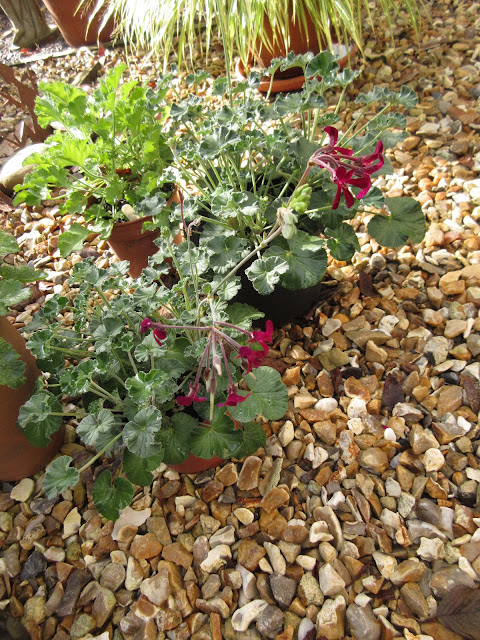