In a Vase on Monday - Small and beautiful

Well this is one group that has no limits as to how many can meet, and no restrictions except those deemed to be required by Cathy our leader: In a Vase, On Monday, from your garden! But watch out as next week there is an anniversary challenge with Vase only.  This week just by coincidence Cathy has a 'Pink Rock' and pink flowers.

Sitting on our conservatory table is this week's little vase.  In it are the fine dainty flowers of Serratula tinctoria subsp. seoanei, and to give some idea of size I am sure you all know the little daisy: Erigeron karvinskianus, and for greenery some stems of Phuopsis stylosa.

It is joined on the mat by three pebbles.  I love stone and pebbles, so much so that we chose to make walking surfaces in the garden of stones and shingle:  the crunch underfoot being one of the sound elements in the garden. This morning I have been off on a geology trip, probably the last for some time. 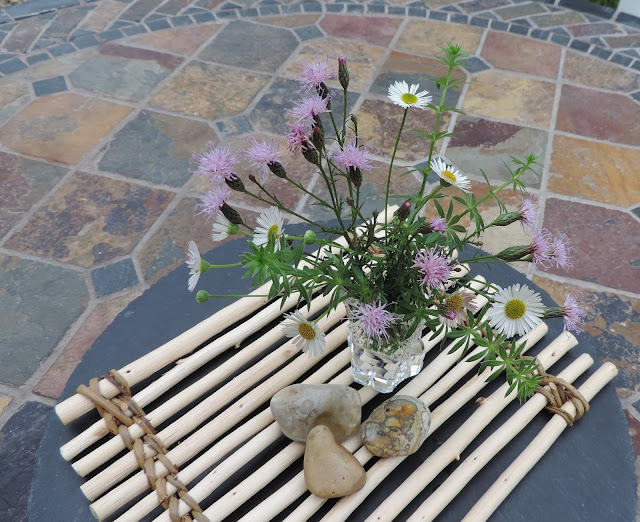 Close up the structure of the Serratula is mesmerising..... 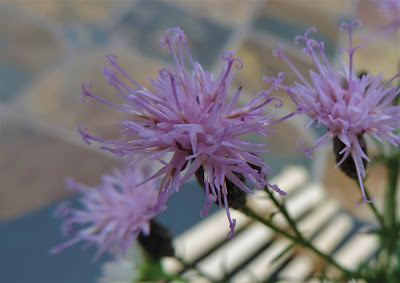 "Serratula seoanei bearing terminal light pink coloured composite flowers. The regular segmented flower bud structure is worth peering at before it expands revealing the anthers packed within. These late flowers fade and the seed appears as a pappus of bristles."

Earlier in the week a friend sent me a link to Angie Lewin's exhibition in Edinburgh. Of course I enjoyed the virtual tour, and realised that there was a recent book she had illustrated: The Book of Pebbles.  I have a couple of other books, cards and notelets as I seem to drawn to her style of art. 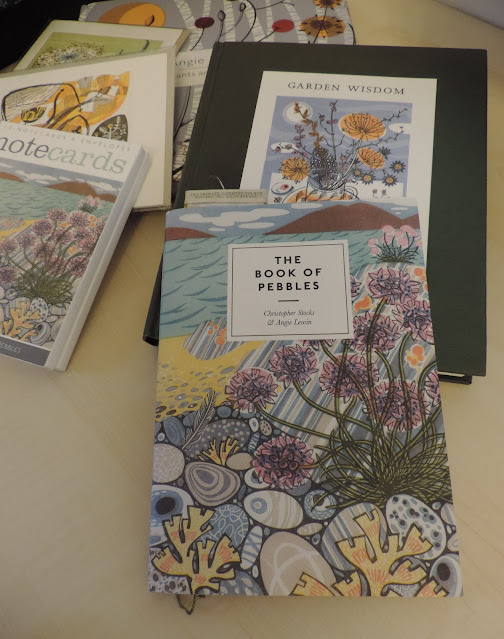 I've only just started on the book.  It is one to read slowly  savouring both words and illustrations. The first essay is called "On Chesil Beach". It is not so long that we spent a day there...
Posted by Stasher at 14:46

Labels: Books, In a Vase on Monday