Why just the acronym?  Should it have been VOM?  It is seven years since Cathy made the call and rallied fellow gardeners together, and since then some of us have been posting on and off, but Cathy has been doing this each week bringing us together under the banner of In a Vase on Monday. The Challenge this week is to post an empty vase.  Having just gone over to Kathy's post after thinking of my contribution and writing it up, I now understand her interpretation of "A Vase with no blooms" I have also revisited the Challenge she set the previous week:

"Amazingly, next week is the 7th anniversary of In a Vase on Monday! On these anniversaries I like to throw down a challenge – this year, the challenge is to share a vase without blooms. We know that pickings become leaner as we move into winter, but nevertheless a number of us have still managed to post vases throughout the colder months – even without blooms there can still be material available to make a pleasing vase, so do give it a try."

You can tell that I had not read fully this to the end, or understood the challenge.  No blooms means no flowers, but there are other things in the garden such as seed heads and grasses.  All I can say is that Cathy has NO vase!  My speedy interpretation lead to my thinking of an Empty Vase.  Strangely I am feeling a little like an empty vase during these strange times: something is lacking, sadness at the state of the world constantly needs to checked and replaced by appreciation for what we do have:  weekly 'artistic' efforts shared and  friendships made across the world.

My Vase without Blooms:

I have a vase, one carved out of soapstone, which is almost impossible to match with anything from the garden, which is the reason it has not featured on any of my previous posts.

My mother went on a Grand Tour of China in the late 1980s and brought back a few things, some of which she brought as presents on her next visit to the UK.  This soapstone vase is less than perfect, but as something completely hand made probably by a poor artisan, working outside the state infrastructure and sold on the street, it suits me perfectly.  My mother rebelled against the dictate to buy high end items from the state run shops only, preferring to support artists directly. 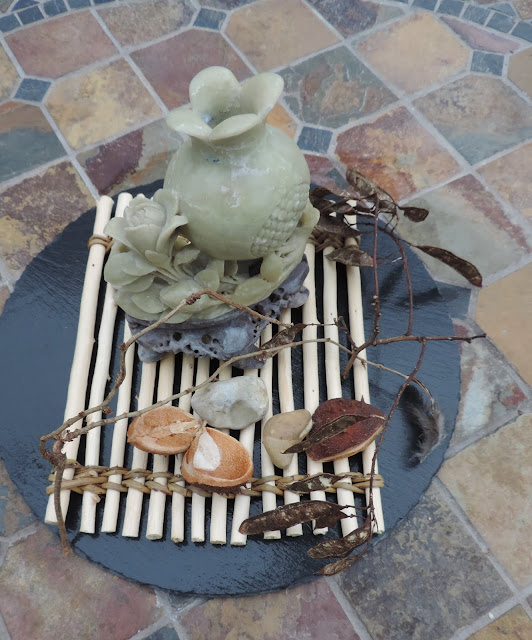 This week, with  its own stone carved bloom which withers not for lack of water, neither fades under the sun. it is sitting in the middle of my stone table with a few finds from recent walks.