Another mildish week, with lots of rain and wind, and some intervals where sun has come out has made popping out into the garden a possibility. Had The Prop who gathers us under his sheltering post each week, talked about planting so many alliums in pots, that may have sown the seed of the idea and I may have planted the tulips in pots. For tips, inspiration, plant admiration and the general camaraderie that is created each week, do go and enjoy Jon's post, and those of other enthusiasts.

(1) I managed to plant all my species tulip bulbs, but a couple of days later had the low sinking feeling in the pit of my stomach.  Most gardeners recognise and know that feeling.  The soil looked further loosened and the mulch scattered.  Yesterday as I stood at the study window I saw the culprit: a very plump grey squirrel digging through my neighbours pot.  When I told Mr S how much the bulbs cost, he said that amount could have bought him an engine for his railway layout, and that does not get eaten by the squirrels!  Sadly the species bulbs are now out of stock.  Should I decide to put in a repeat order next year, I will plant them in pots in a very secure manner and only set them in the garden when they are growing well in the spring.

(2) I wonder whether he who dusts had a little mishap with one of my houseplants.  He didn't say and I am not asking.  When I saw a little soil on the windowsill, I decided to take the whole pot outside to investigate.  The problem was that all the roots had in effect died and reasonably healthy looking top has separated.  It could have been that I was a little zealous with the watering, which caused the stem at soil level and the roots to rot off.  The only solution was to rejuvenate it by selecting a few of the good shoots, preparing some fresh well draining medium and repotting the 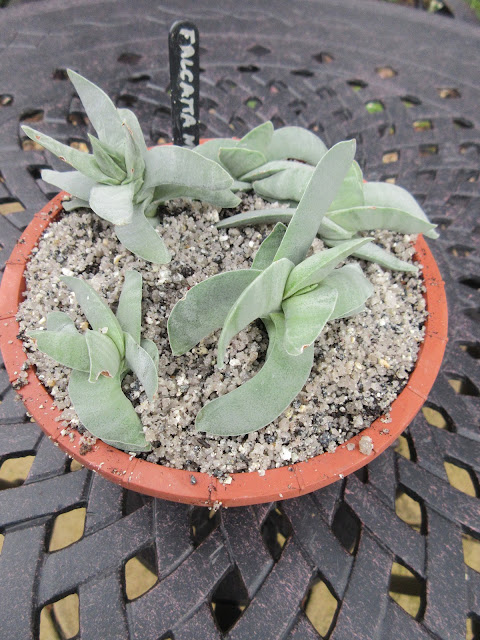 Crassula perfoliata var. falcata or var.minor, which I last did in February 2018. I shall try the cool and dry winter cultivation advice. The little nibbles on the leaves were collateral damage from having spent the summer in the garden exposed to all the wandering insects.

(3) The weather been just right for shrub moving.  At least I hope so, time only will tell.  I used to have a thing about Myrtles and still have two or three.  I propagated a smaller plant of Luma Apiculata Glanleam Gold to bring to this garden, and it had been planted far too close to the fence and too far away for me to enjoy it without stepping across other plants. It got moved to form a little gathering of evergreen shrubs to lighten up the winter months. 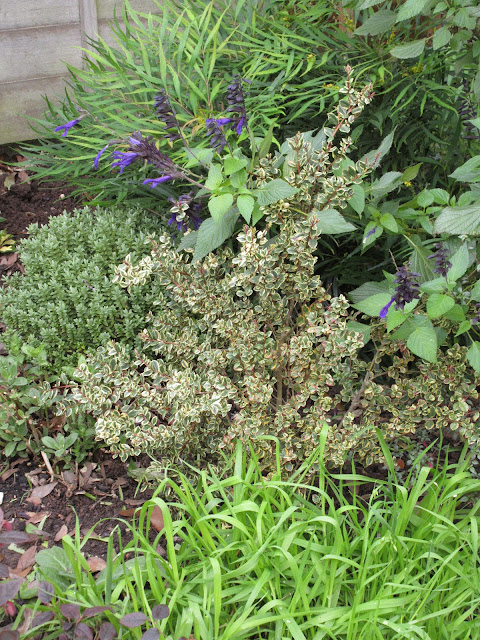 (4) Fuchsia Silver Linings is continuing to grow nicely, and its flowers are still a draw for small bees still out during the warmer calmer spells this week. 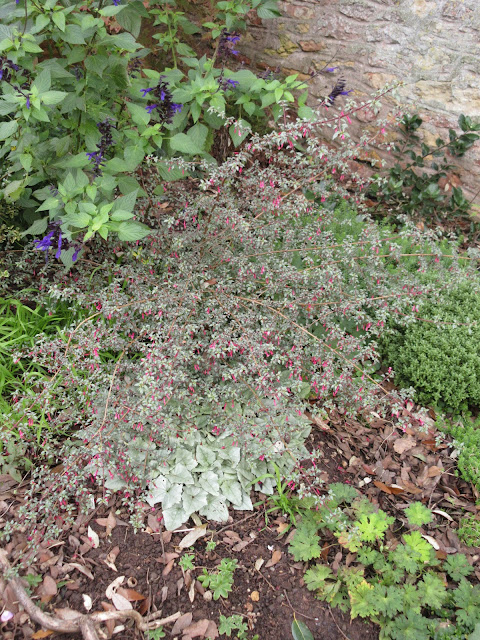 (5) Another Shrub just coming flower is the Rosemary and it too is drawing in the late bees.  The older stems  left from the original structure are the first to come into bloom, but all the newer growth have small flowering buds forming. 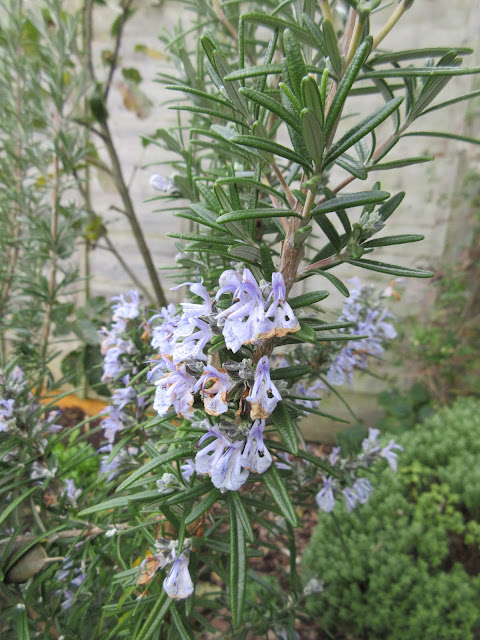 The  three different forms of Rosemary I have are in great shape as they enter the winter.  This tall upright form was given quite a severe cut back in March, with the expectation of it being removed.  Since it has grown back very nicely and adds structure as well as some height, it is staying, and in the spring, I shall remove the older stems and have a fine rejuvenated shrub. 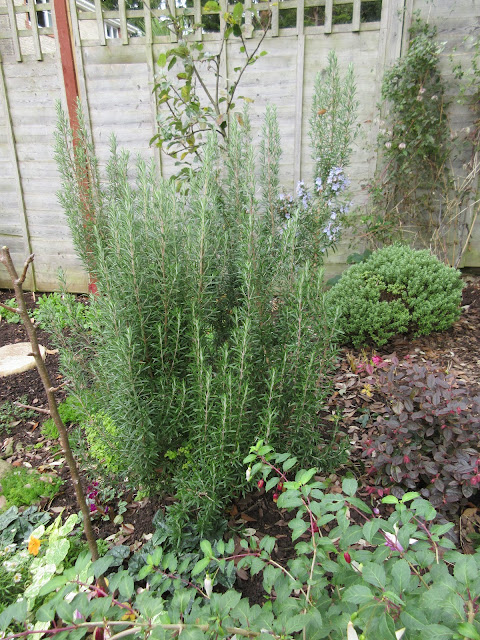 (6) The wild pollinated cyclamen coum seedlings most probably distributed by the ants are starting to emerge, and there are some lovely variegated leaf patterns emerging, I've checked and compared all the cultivars that I bought last year.  This new one is quite different, I see a dark Christmas Tree, on a silver background with the round leaf edged in green. Shall I name it 'Noelle'.  It needs to be rescued and planted individually to grow on, giving  Galanthus Blewbury Tart room to emerge. 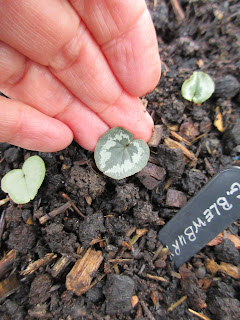 The closest pattern cyclamen coum in the bed is this one, and I also have 'Maurice Dryden' close by. 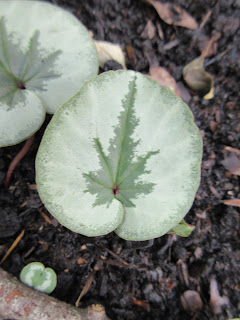 With a very wet, stormy but warm week, I'll be able to garden in any intervals from the paths, but the ground is already too wet to work on.  Maybe I ought to take advantage and tidy out the shed, and plan what veggies I shall be growing in my very small potager next week.