In a Vase on Monday - Hedgerow gleanings

Yesterday morning, we set out for one of our regular leg stretche straight from our front door.  Having a small and narrow hall which will be recognised by many British people as being the norm in newish houses, means that walking shoes often need to be put on outside, as any bits caught on the soles and not washed off, would otherwise inevitably get scattered around, and then require a good clean up on return from the said walk. In  the Summer this is no problem, but during the winter it is another thing!

We have a circular walk from the front door, of around 7 Km which takes us round a hill and down onto the Somerset Levels which is crisscrossed with ditches called rhynes.  Before you reach these wet 'hedges' as you walk down, hedges abound with plants, ferns and bird wildlife. Down on the rhynes stands of sedges line the road. 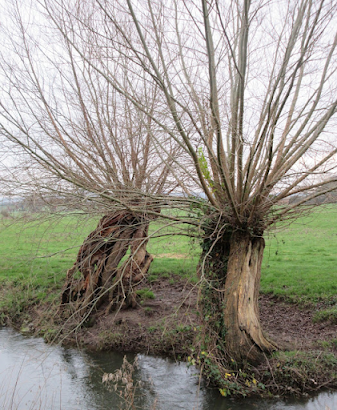 Willows abound on the section we walk along, in other areas different types of trees dominate. Without secateurs I still managed to pick a few stems, taking care that I didn't fall in any of the ditches.  Arriving home, I arranged the bits in a brass vase. 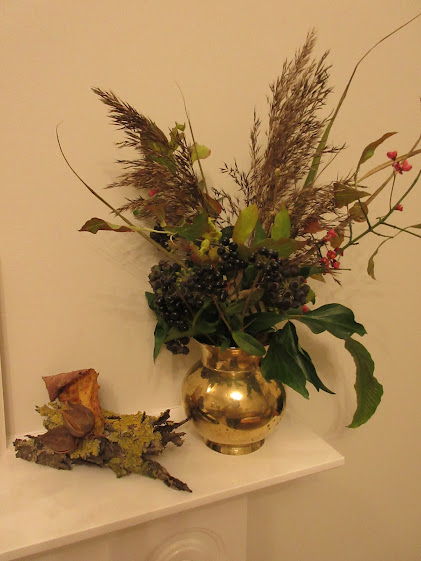 A few berries remained on the Euonymous europaeus aka Spindle Bush 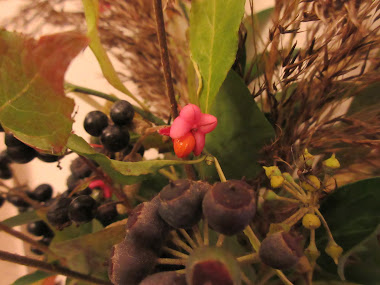 I'm not sure whether I was picking Alder Buckthorn but I think from the position of the shiny black berries this is Wild Privet Lingustrum vulgare. 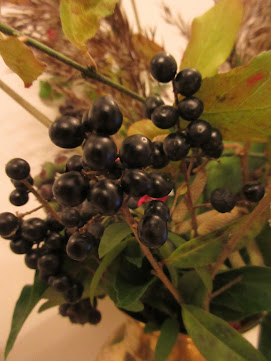 Of course there is no confusing the berries on the ivy... 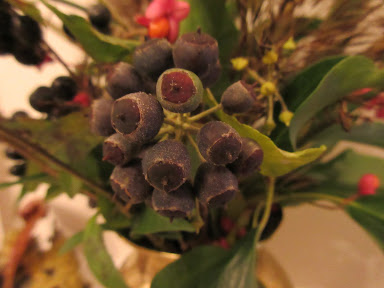 The higher banks are dripping down Hart's tongue fern, with its many variations, some leaves are long and pointed, some broader, others forked at the ends, some with very wavy edges.  Because they grow in such large drifts it is easy to overlook them as 'background' greenery.

This week's vase is in celebration of the magnificent countryside and wildlife that surrounds us. I'll be joining in with Cathy as with others to mainly celebrate things growing in our gardens.