At the suggestion of my Daughter in Law, we met up at Kelmarsh Hall on 26 July, to spend an interesting day out together at the Festival of History. The extent and the variety of the events ranging from Roman to Second World War, was more that sufficient to keep us entertained all day. Having looked through the Show Guide, I feel that two days would have been better, and having the Show Guide in advance, would have meant missing fewer excellent events.
Brian, Veronica's father, was particularly interested in the Roman Imperial Army. We watched a large band of soldiers as they demonstrated fighting techniques. The skill of the riders was particularly noteworthy. We watched gladiators fighting with various techniques. In other arenas there were horses, mules and a camel, demonstrating the roles of animals in War. As part of the re enactment of a second world war scene, there was even a flying spitfire.
After spending some time browsing the period stalls, I found a replica brass cloths pin. It was made by this 'Roman Soldier', and his wife was the stall holder. Brian bought some interesting herb plants to add to his collection back home. 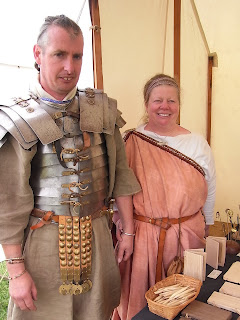 As we walked around we found the The New St George Waits playing in a large tent, where there were chairs. They were playing English bagpipes, of which I have been a fan for a long time, hurdy gurdies, woodwinds etc. 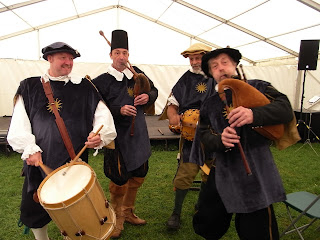 We were really lucky with the weather that day, and so must have been the organisers. To have a weekend with two goods days of weather is pretty remarkable this year. On our drive there and back, the combine harvesters were slowly cutting their way through fields of wheat.