Kenilworth has many societies and organisations. Having been on the Wroughton Horticultural Club Committee and having been Assistant Show Secretary, one of the first clubs I joined when I moved, was the Kenilworth & District Horticultural Society.

The members are a very friendly bunch, and the Committee do some wonderful work, which makes for an informative, and interesting evening out once a month. Last night was our Fuchsia Plant Competition. Earlier in the year, members were able to buy for the grand sum of 40p, a small fuchsia rooted cutting. The cuttings have since then been grown on, some with excellent success others having problems either with soaring temperatures in greenhouses, etc., and there were many excuses last night for non production of plants. 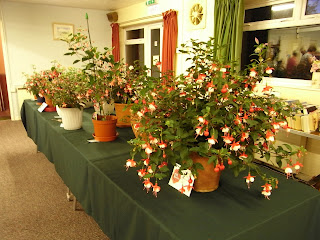 My plant was pretty good, probably the bushiest plant there, but I knew it was deficient in flowers, though from the number of buds I'm sure I shall be taking pictures and posting in a few weeks time. I rooted the first pinchings, which have given three plants now nearly as large as the parent. Next year, I shall leave seven weeks between the last pinching and the show. My tubs with geraniums etc are faring poorly in this rain, and I shall repot them up with the fuchsias, which seem to be enjoying this weather. 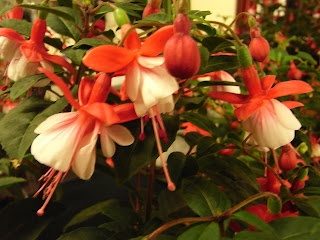 After the talk by eminent RHS judge Derrick Ford, on Hardy Plants in the Garden, refreshments were served, and then a raffle, with so many prizes.
Posted by Stasher at 15:06