Yesterday morning Mr S popped out for a few hours and in between everything, I thought I would make some bread. During our visit to the Leamington Food Festival on the Saturday, I had bought quite a few bits and pieces, including some goodies which we consumed alongside great beer and cider, but no bread.   I was looking for a particular recipe, and in the end got out my pile of books on bread...my stash of bread books..... 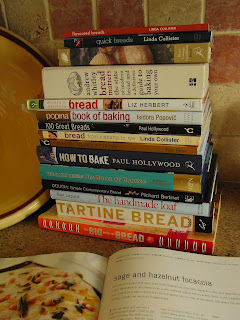 I have decided to keep a note book to list where I find favourite recipes to bake, to cut down the time it takes me to find the one I want...this is one I have made before.  This time I split the dough in two and baked them with different topping:  sage and hazelnuts as per the original, and roasted peppers and garlic on the second. 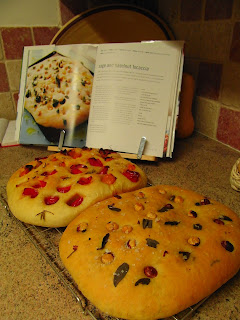 and as they say on the 'packet' here are some serving suggestions:  his and hers packed lunches for today, with cold roast chicken and wild rocket! 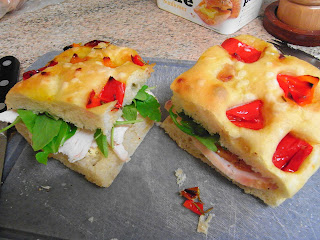 I allowed a slow rising of the dough,as on his return Mr S and I went for a spin to Packwood House and had a turn in their garden...their walled garden was fun to walk round: discovering the gourds hanging down from the tunnel made of hazel sticks,  their sunken garden with succulents, and their borders which were full of colour, and buzzing with insects such as hover flies, wild and domesticated bees etc.  We often pop out there, as there is so much going on in the garden at different times of the year. 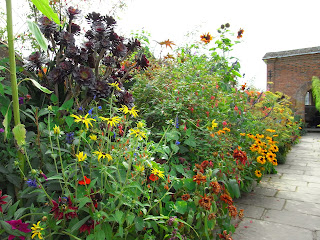