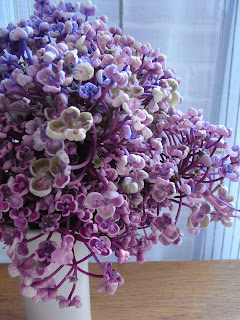 Last week the Kenilworth Horticultural Society had their Autumn Show.  It was much reduced compared to previous years.  I was happy to return the cups, and for a year at least not have to polish the silver.  Maybe as it was in the new venue at Jubilee house, or perhaps the weather had played havoc with the gardens this year, and maybe it was just because I and another keen gardener had not entered!

One reason I did not enter was that I had been invited to help with the judging.  Andrew Caine who often judges at the Gardening Club arrived promptly, and we went through the classes allocated to us.  We were both drawn to an entry under Garden Blooms: three stems.  When I first viewed the vase across the room, Lilacs were the word which came to mind....but I must be excused, see later...

Close up the bloom of Hydrangea Macrophylla (Serrata?) Uzu Azisai is intricate 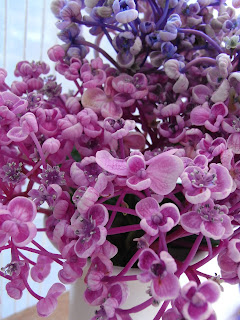 with different colours on each stem.  The original plant had been purchased about twenty years previously from a special exhibition.  The exhibitor kindly offered the blooms to me, to try to propagate from their stems.....but I left the show without them....more about my excuse later.  Sunday morning I had a call from Andrew, and a few minutes later he arrived with the stems, which are now carefully potted up.

As for my excuse....I had spent the morning at Coventry Hospital being given a very full eye examination, and my eyes were still sore following all the drops which were administered in order to explore the back of my eyeballs.  It all started on Sunday night, after a full day at the Open Garden Day at Fieldgate House where I was running the plant stall, as I lay down to read my book, suddenly the bottom half of my right eye seemed to mal function, and shortly afterwards was full of floaters and cobwebs etc....

I am starting to get used to this, my vision isn't impaired, no new glasses required, but dark glasses and hats in sunshine help.  Apparently my condition: posterior vitreous detachment PVD is not unusual for someone of my age and who is very short sighted.   It is reassuring to learn that it is unlikely that I shall experience retinal detachment.
Posted by Stasher at 12:00