A couple of weeks ago, I had a really lovely day.  It was a Sunday and we had not planned anything in particular.

After a pleasant breakfast in the conservatory, and a look up to the sky, I just had this urge to go out and fly a kite.  Since it has been a pretty miserable year weather wise the recent change to sunny weather is encouraging us out into the country.

With a picnic packed up and kite selected, we set off for Burton Dassett.  This lovely spot reminds me of the Wiltshire Downs which were the backdrop for walks and days out for over 30 years.  When we started to walk and look down at the grass sward we were amazed to find the whole range of flowers one would see in May or June.  The cool weather, with all the rain, then the sun had maybe caused a second flowering, or maybe there had been none earlier in the year. 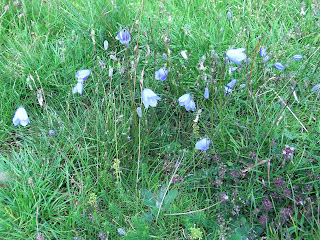 After flying the kite and a walk, Mr S said he thought he could hear an unusual vehicle.  Within a short time we had found a good vantage point alongside the road, and had a running commentary from a couple who came to join us.  They usually entered their vintage car, but this year they came to cheer on some friends, we benefited by having an excellent running commentary.  This was the annual run from Coventry with several hundred vintage vehicles.  I'm certainly going to look out for this festival next year. 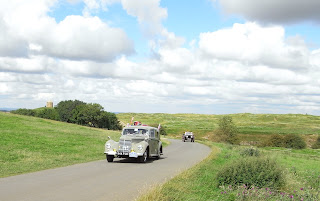 Some cars decided to pull up for a picnic, and near our car was this beauty, which was similar to the  car  my father had when I was young, except for a few items.  I can't remember the shades over the headlights! 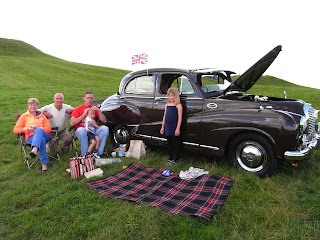 We used to go to the seaside most Sundays in the big black car when we were young.
Afterwards we drove to the National Herb Centre and collected a few different herbs for the garden.  We topped off the day with a visit to Compton Verney, and enjoyed the exhibit on flight, and then tea with scones in their restaurant.  We thought we had just caught part of the act, as we walked up to the house, as there was a plane doing loop the loops overhead.﻿
﻿
﻿
﻿
﻿
Posted by Stasher at 22:44