Again another very small village, with pretty paths.  We set out for a walk up the valley, visiting first the Old Church and then the New One.  Each very different, much loved, and a peaceful place to reflect. 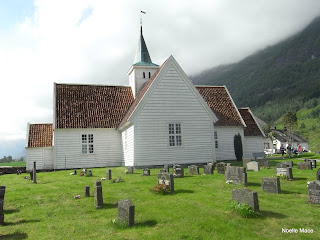 The 'current' old church built on a site which has been a place of worship since the 13th century, was built in the 18th century.  The cross shaped church has some pretty carved pews and lovely hat stands.  The oldest pew has 1672 carved on its hat rack. 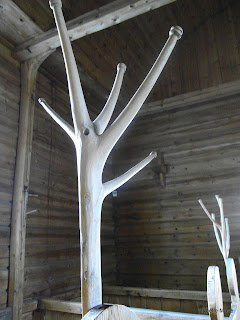 Each member had his or her allocated space, with men sitting on the right side, and women on the left. 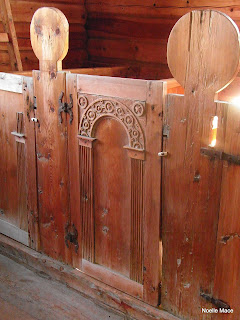 The Altar was pretty 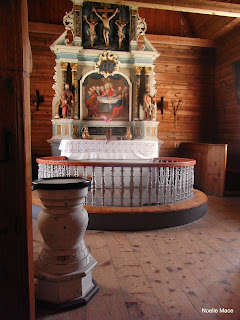 and worth stepping into to area and it was surrounded with a collection of early paintings. 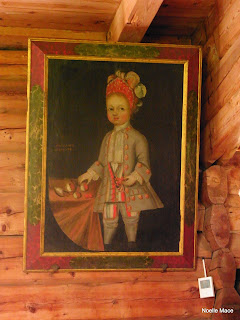 We followed the trail up the valley to the New Church, looking at the local wild flowers, listening to the bird song and looking through the clear water of the brook. 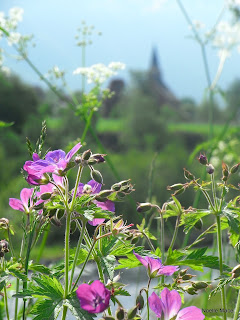 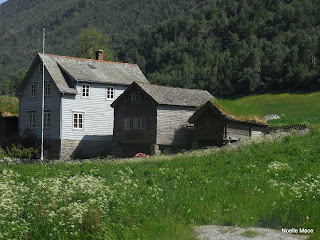 the cows were out for their annual holiday...yes by law they must spend time outside in the sunshine during the summer, and they have beds, proper beds in their barns, with music and they get to lie down by their friends. 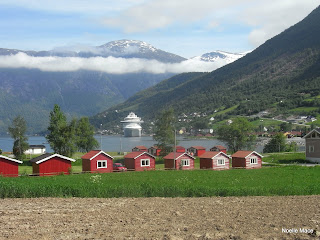 Down in the village we went to the local store and spoke to one of the shelf fillers about the famous Norwegian Brown Cheese.  We had located the cheeses but not understanding Norwegian, needed some guidance.  He was very helpful and we bought a large block of the goats brown cheese which is the most highly prized....it is delicious, quite sweet, and lovely on a cracker with some nuts with a port as 'pudding'.  There were quite a variety of the brown cheese on the shelves from cows milk, to half cows and goats, and then whole goats milk.

We also met up with the outing from the local Kindergarten and I chatted with one of the minders.  I loved the big buggy they used and they were very happy for me to take this picture. 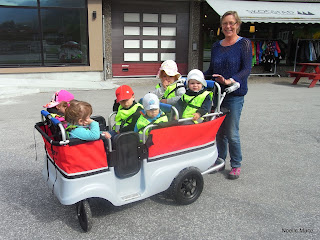 As we walked the final stint to the ship along the road, where there was absolutely no traffic of any sort within site we decided to cross the road about 50 metres past a crossing and we were told off by a lady on her bike who came out of a side turning!  I wonder whether she was a local who had campaigned to have the zebra crossing put in for the tourists, and then we did not use it?  Even this old lady spoke English!
.
Posted by Stasher at 10:48